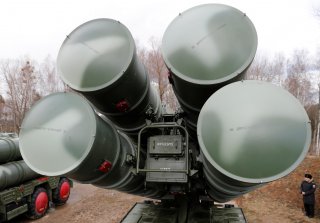 Here's What You Need to Remember: Russian defense officials and commentators have framed the S-500 as a “silver bullet” against U.S. stealth aircraft, with the manufacturer, Almaz-Antey, calling the system a “blow against American prestige.”

"The first regiment of the S-500 air defense systems has entered service with a unit, whose combat duty is to guard and defend the airspace above the capital of the country," a source close to Russia’s Defense Ministry told Russian state media outlet TASS. The source did not provide a timeline for the system’s entry into service, nor did they specify which military unit will take delivery of the systems in Moscow. The source added that the second serially produced S-500 regiment will be delivered to Russia’s missile forces in the first half of 2022, as part of a “long-term contract.” A report from Russian news outlet Gazeta.ru added that the S-500’s in Moscow will be deployed alongside Pantsir-SM surface-to-air missile (SAM) systems, in keeping with Russia’s echeloned approach to missile defense networks.

While TASS suggested that the new missile systems could have gone to the 15th Aerospace Forces Army, a defense industry insider source told Gazeta that the first S-500’s were handed over to the 1st Special Purpose Anti-Aircraft and Missile Defense Army instead. “The 15th Aerospace Forces Army is for satellites, control of orbital units, space surveillance, and detection of intercontinental ballistic missile (ICBM) launches. That is entirely different [from operating missile defense systems]. The 1st Anti-Aircraft and Missile Defense Army—that’s the defense of Moscow, the S-400, the Pantsir air defense missile system. That’s where the S-500 went,” the source said. Former first deputy commander-in-chief of Russia’s Aerospace Defence Forces (VVKO), Colonel-General Vladimir Litvinov, told Gazeta that more than three S-500 systems will be needed to fully cover the outer reaches of Moscow’s airspace.

Russian deputy prime minister Yuri Borisov told reporters in mid-September that the first S-500 regiments have entered service, but the announcement came with a caveat. “The state trials have just completed, and the first supplies of this complex have started,” Borisov said. “That is not yet the full range as the Almaz-Antey Concern requires. The configurations of the complex were discussed.” Borisov’s ambiguously worded statement appeared to suggest that certain components may be missing from the handful of S-500 units that were already delivered, hinting at something of a soft launch for the new system.

Russian defense officials and commentators have framed the S-500 as a “silver bullet” against U.S. stealth aircraft, with the manufacturer, Almaz-Antey, calling the system a “blow against American prestige.” Military expert Alexei Leonkov projected confidence that the S-500 will fare particularly well against the upcoming U.S. B-21 Raider stealth bomber. “The U.S. military relies on the stealth of the B-21,” Leonkov said. “But they do not take into account that work is constantly underway to improve and update Russia’s radars… Russian military radars will be able to detect the B-21, which can then be engaged not only by the S-400 and S-500 but also by [other] air defense systems.”

The S-500 “Triumfator-M” is a next-generation missile defense system that reportedly boasts an effective operating range of six hundred kilometers against ballistic missile threats and five hundred kilometers for area defense missions. The system is widely believed to be capable of tracking and simultaneously engaging as many as ten ballistic missiles flying at speeds of four km per hour, while also being able to counter hypersonic cruise missiles and a wide range of unmanned aerial vehicles (UAVs).