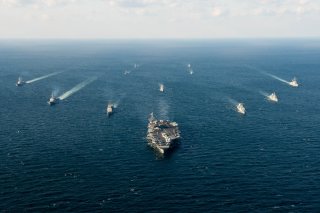 Here's What You Need to Remember: While acknowledging that the Soviet-era P-700 missiles lacked the range and performance to credibly threaten U.S. aircraft carriers, the RT article argues that “this problem will be largely solved” by Tsirkon.

The Carrier Strike Group (CSG) is among the most potent weapons in the U.S. arsenal, capable of projecting an unparalleled degree of firepower far beyond American waters. In its modern incarnation, a CSG typically consists of a single aircraft carrier, a carrier air wing (CVW), at least one guided-missile cruiser, a destroyer squadron, and several attack submarines. These fearsome formations have become not only a pillar of U.S. Naval doctrine but one of the most recognizable symbols of American military power. Washington’s rivals, too, have taken note. Here is what Russia, one of America’s two biggest military competitors, thinks of American CSG’s.

Russia possesses no CSG’s, nor is it likely to acquire that capability in the future. The country’s sole aircraft carrier, the geriatric and problem-ridden Admiral Kuznetsov, is ill-suited to that task. Nor is Admiral Kuznetsov truly an aircraft carrier in the traditional, western understanding of the term. Rather, it is called a “heavy aviation cruiser” to emphasize its hybrid role between a heavy missile cruiser and an aircraft carrier. Packed with far more weapons than its U.S. counterparts and intended to be capable of sailing alone, the Kuznetsov class was designed to not to imitate American aircraft carriers, but to threaten them if they encroached on Soviet (now Russian) territory. Kuznetsov’s bespoke purpose reflects a fundamental difference in the way that Russian and American strategists think about naval power. Russia, in all its incarnations, has always been a land power that is structured around its ground forces. Whereas the United States is a maritime nation that needs its Navy to project force on a global scale, the Russian Navy’s primary mission is to secure Russia’s vast Eurasian frontiers.

Simply put, Russia doesn’t have CSG’s because its military doctrine does not require the unique capabilities that they provide. Nevertheless, Russian experts respect the threat posed by CSG’s. A 2017 article by Russian outlet RIA Novosti, “Arks of Democracy,” described the CSG’s capabilities in painstaking, if not fairly accurate, detail. The article ended on a deferential note: “The CSG represents a formidable force, capable of destroying, or at least degrading, the infrastructure of even a large country with a powerful military. Coastal and island states are especially vulnerable to them [CSG’s].”

But recent Russian assessments have been more upbeat, reflecting a confidence that the Kremlin’s latest slew of weapons projects has given it an edge over CSG’s. Retired Russian Colonel Mikhail Khodaernok wrote in late 2020 that Russia’s new 3M22 Tsirkon winged, anti-ship hypersonic missile “will radically shift the balance of power on the high seas.” While acknowledging that the Soviet-era P-700 missiles lacked the range and performance to credibly threaten U.S. aircraft carriers, the RT article argues that “this problem will be largely solved” by Tsirkon. With a range of 1,000 to 2,000 km, a top speed exceeding eight Mach, and reported ability to maneuver mid-flight, Khodarenok posits that Tsirkon can easily bypass the surface-to-air systems of current CSG’s. Russian military observers have also pointed to the upcoming Poseidon system— a nuclear-powered underwater drone armed with a 2-megaton atomic payload— as a powerful counter to CSG’s. The warhead’s explosion is meant to generate a radioactive tsunami that is capable of contaminating a large area. Russia’s military establishment maintains that the drone travels too fast, and boasts too great a range, to be reliably intercepted by a CSG’s anti-submarine warfare (ASW) elements.

CSG’s are no longer the unstoppable maritime juggernaut that they once were— at least, not in Russia’s eyes. Citing the Kremlin’s recent advancements in cutting-edge weapons technology, contemporary Russian observers are increasingly confident that they have the tools to neutralize these formations in the event of a major conventional war with NATO. Given the catastrophic global consequences of such a conflict, let’s hope that this debate forever remains an exercise in hypotheticals.