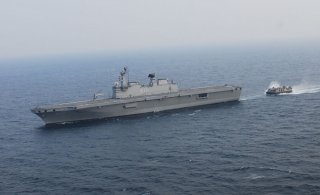 Here's What You Need to Remember: In addition to the investments in building the warship, which could exceed $1.8 billion, it has been reported that maintenance and operation of the fleet could cost around $180 million annually. However, the force projection and the ability to counter threats from North Korea are certainly worth every penny.

The Republic of Korea (South Korea) could be poised to invest $1.8 billion on a new light aircraft carrier, with its first deployment set for 2033. This isn’t exactly a major turn of events, as Seoul has hinted for a while now that it had interest in building “multi-purpose large transport vessels.” Last August the South Korean government announced that it would move ahead with plans to procure several aircraft carriers in the coming decade to address threats from North Korea as well as the increasing naval ambitions of China and even Japan.

According to a report from UPI, South Korea’s military and Defense Acquisition Program Administration announced that the light-aircraft carrier project will move forward during February’s 133rd Defense Project Promotion Committee.

The future warship is very much in-line with past reports of what South Korea had planned to build—a 30,000-ton light carrier that would have the capacity to move troops and equipment, but also have the ability to serve as command or flagship of a maritime unit. It would be equipped with vertical or short takeoff and landing (VSTOL) aircraft, which could respond to a variety of threats around the Korean peninsula. It would also feature a well deck, capable of launching Republic of Korean Marines and Navy personnel for an amphibious landing—and thus be similar to the United States Navy’s USS America-class of amphibious assault ships.

The protection of South Korean citizens in the event of disaster overseas would be a chief objective of this new warship. It was just last month that South Korea deployed a warship carrying the Cheonghae anti-piracy unit to the Persian Gulf after Iran seized a Korean-flagged commercial tanker. The naval task force is named after the historical 9th century Korean military base Cheonghaejin, and it was first deployed overseas in January 2020.

The addition of a carrier to the South Korean Navy would be the first of its kind for the South Korean military and could act a strong deterrent against such moves by Iran or other powers in the Indo-Pacific region. Moreover, it would give the Republic of Korea the ability to address threats on the global stage. It would also provide Seoul with a significant power-projection capability to address potential threats from North Korea and help to counter Pyongyang’s plans to develop nuclear-powered submarines and even hypersonic missiles.

The light carrier could carry as many as twenty combat aircraft and eight maritime helicopters. South Korea has already expressed interest in the Lockheed Martin F-35B, the VSTOL variant of the Joint Strike Fighter, which would be ideally suited to such a new warship.

At issue however remains the cost. In addition to the investments in building the warship, which could exceed $1.8 billion, it has been reported that maintenance and operation of the fleet could cost around $180 million annually. However, the force projection and the ability to counter threats from North Korea are certainly worth every penny.