This Soviet Submarine Could've Been a Monster 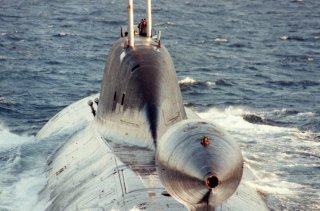 Here's what you need to remember: The results spoke for themselves: within the span of one attack submarine generation, the USSR went from a crippling acoustics disadvantage to being able to trade stealth performance blows with the competing U.S. Los Angeles class.

The Akula class of nuclear-powered attack submarines is a formidable and remarkably long-lived showcase of the late Soviet Union’s single-minded drive to keep pace with—if not exceed—its Cold War competitor.

Late Cold War Soviet submarines were, by most measures, faster and most durable than their U.S. counterparts. But their performance was crippled by one glaring flaw: suboptimal acoustics. Whatever their deficits in other areas, the U.S. military believed that, in the event of a major maritime conflict, American submarines could detect, target, and neutralize their Soviet counterparts before the latter had a chance to respond.

Soviet high command caught wind of this vulnerability—in no small part, through the efforts of Soviet spies like John Antony Walker—and set about redressing it with a new line of nuclear attack submarines dubbed the Project 971 Shchuka-B (NATO reporting name Akula), not to be confused with the Soviet Akula-class (NATO reporting name Typhoon) strategic submarines. Displacing at around 8,000 tons and featuring a top speed of roughly thirty-four knots, the Akula attack submarines were built from the steel double hull construction typical of late Soviet submarine design. The baseline Akula class featured four standard 533-mm torpedo tubes and four more 650-mm tubes for a total capacity of forty torpedoes, as well as mines and the RPK family of submarine-launched anti-submarine missiles.

But while its outward construction was hardly revolutionary, the Akula submarines offered a host of forward-looking design measures taken to reduce the vessels’ acoustic signature. With the help of milling machines acquired from a Japanese firm, the Soviet shipbuilding industry designed new, higher-quality propellers that produced significantly less noise than their predecessors. The interior compartments were additionally designed to maximize sound dampening and with a slew of active noise cancellation measures. The results spoke for themselves: within the span of one attack submarine generation, the USSR went from a crippling acoustics disadvantage to being able to trade stealth performance blows with the competing U.S. Los Angeles class.

The Akula II revision was intended to feature further acoustics enhancements that would have made the Akula line quieter than the Los Angeles class, but the effort sputtered in the face of unexpectedly steep production outlays; only one Akula II-revision vessel, the K-157 Vepr, made it into service. The Akula III line, conceived amid the disrepair and budget shortfalls of the Soviet collapse, fared just as poorly with only one serial model, the K-335 Gepard. Four of the original Akulas have been decommissioned, leaving just three. All six improved Akulas are currently in active service or undergoing refits, with one— he Nerpa—leased to India until 2022. Both Vepr and Gepard are currently active in Russia’s Northern Fleet, with the former reportedly set to receive an upgrade to Russia’s new Kalibr cruise missiles.

The Russian Navy intends to phase out its remaining Akula vessels with the new Yasen/Yasen-M class of modern nuclear-powered cruise missile submarines. Nine Yasen submarines are slated to enter service through 2028.