Speed, Stealth, and Lethality: Meet the Four of Deadliest Planes on the Planet 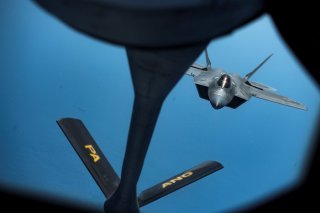 Here's What You Need to Remember: Currently, the one fighter that easily takes the cake is the U.S. Air Force F-22 Raptor stealth fighter. But there are a few others hot on its tail.

While many experts may have different perspectives, here is a short compilation of what I would argue are the top military planes on the planet today:

One of Russia’s most capable fighters is the Su-33 carrier-capable fighter. Derived from the legendary Su-27 fighter of Soviet vintage, the Su-33 fighter jet is larger and can fly farther. In a nod to the platform’s intended carrier role, the Su-33 jet’s wings fold upwards for storage aboard Russia’s sole aircraft carrier.

The twin-engine Su-33 jet features a number of improvements over its Su-27 parent that address the stresses of aircraft carrier landings and result in a more robust platform. At the front of the plane, the Su-33 jet has canard winglets mated to leading-edge root extensions, granting the airframe a degree of maneuverability not often seen for carrier-based fighters. Altogether, the airframe's large wing area and numerous control surfaces result in a fighter capable of both low landing speeds and high maneuverability.

Despite the Su-33 jet’s remarkable characteristics on paper, the platform is severely limited by Russia’s sole aircraft carrier, which is noted for its unreliability and lack of proper repair equipment. China has a knock-off Su-33 jet in service, which they dub the J-15, though their copy is noted for being extremely unreliable. Despite the promise the platform held, the airframe has been decidedly unsuccessful on the export market, and its days may be close to over.

Currently, the one fighter that easily takes the cake is the U.S. Air Force F-22 Raptor stealth fighter. The F-22 jet was originally designed to take on the best of the Soviet Union’s fighters in air-to-air combat, as in this role is easily the world’s deadliest air superiority fighter. And, not only is the F-22 fighter jet fast, with a maximum speed of just over Mach 2.2 (albeit with afterburners when at altitude), but it is also highly maneuverable.

On the bomber side of the flight, another American plane is a clear winner. The Northrop Grumman designed B-2 Spirit bomber benefits from a highly stealthy, flying-wing design. In addition to an internally-carried weapons load and stealthily serrated bomb bay doors, the B-2 Spirit bomber also features serpentine engine air intakes that hide the bomber's engine blades from radar detection.

Besides being very hard to detect, like the F-22, a B-2 bomber has never been lost in combat the strategic B-2 bomber is equipped to carry nuclear weapons, making it quite possibly the deadliest airplane ever built though perhaps not for long.

The yet-to-be-seen B-21 Raider is the spiritual successor to the B-2 bomber, and from what precious little information about the airframe can be learned, is outwardly similar as well. It too is a flying wing design, though more concrete facts about the airframe are difficult to independently verify.

Upgrades would likely include an improved, smaller radar cross-section, perhaps faster maximum speed, as well as a higher payload capacity. A reduced exhaust heat signature could also be in the works.