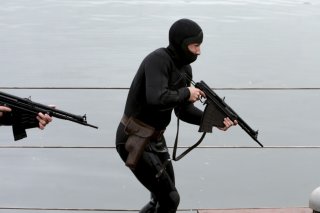 Here's What You Need to Remember: Because of the APS’s above water limitations, frogmen would carry both the APS for security underwater and another weapon for use on land. This necessitated carrying two rifles and double the amount of ammunition. It was an imperfect solution. The ASM-DT was designed to address this very problem.

Frogmen, or underwater military specialists like U.S. Navy Seals, are equipped with a number of different weapons optimized for underwater missions, and their small arms are no exception. Conventional firearms don’t do well underwater—and neither do the bullets they fire. In this neat video, an AK-47 is shot underwater and you can see why doing so would not be very helpful during combat. Bullets made for firing above water experience huge amounts of drag, and have an incredibly short range—only five or six feet, or a little less than two meters.

Some firearms are optimized for underwater firing, however. So-called needle guns.

Needleguns function similarly to spearguns used for underwater fishing. The projectile they fire is long and thin, almost like a short knitting needle. The projectile is fitted into a conventional bullet case that has a propellant and a primer.

The APS superficially resembles an AK-style rifle. One of the most noticeable differences is the magazine, which is quite long and bulky. The large size is necessary to fit the 26 steel dart-like projectiles it fires. For improved accuracy and portability, the APS has a steel wire-type buttstock that collapses into the APS’s frame. Though this aids in portability, the APS is likely not so maneuverable underwater due in part to drag caused by the bulky magazine shape.

Range and accuracy are seriously dependent on depth. At increasing depths, the APS’s maximum range falls significantly, as does the rate of fire, thanks to additional hydrodynamic resistance against the assault rifle’s moving parts. On land, the APS is rather ineffective. For example, on land, the barrel suffers from significantly greater wear.

After the collapse of the Soviet Union, several post-Soviet countries inherited the APS and may have produced their own variants.

The APS was updated sometime in the 2000s. The result was the ASM-DT. Though similar, the ASM-DT has several improvements.

Because of the APS’s above water limitations, frogmen would carry both the APS for security underwater and another weapon for use on land. This necessitated carrying two rifles and double the amount of ammunition. It was an imperfect solution. The ASM-DT was designed to address this very problem.

Like the APS, the ASM-DT fired steel dart-like projectiles underwater—but it could fire conventional bullets while on land. The ASM-DT could accept both AK-74 magazines, as well as the larger APS magazines, greatly simplifying logistics and reducing the weight that individual frogmen would have to carry. Unlike the APS, the ASM-DT’s barrel was rifled to improve accuracy when firing conventional ammunition from AK-74 magazines. Barrel rifling allowed the ASM-DT to expel water trapped in the barrel when firing on land, without risking catastrophic damage to the barrel.