Taiwan Is Getting 40 New Paladin Howitzers from the United States 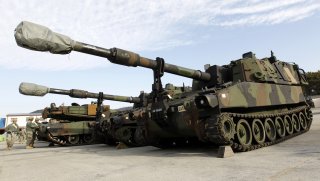 Here's What You Need to Know: The sale of more 40 Paladin howitzers to Taiwan in 2021 is the first major arms sale from the Biden administration to the island of Taiwan.

The State Department announced on August 4 that it had approved the sale of forty M109A6 Paladin self-propelled howitzer systems to Taiwan, along with kits to convert up to 1,698 155-millimeter artillery shells into precision-guided weapons. There was other equipment bundled into the authorization. For example, Taiwan will receive twenty M992A2 ammunition transport vehicles, five M88A2 Hercules armored recovery vehicles, and an Advanced Field Artillery Tactical Data System.

The deal, worth up to $750 million, still requires but is almost certain to receive congressional approval, followed by negotiations between Taipei and the primary defense contractor BAE Systems. The Paladins—which resemble tanks, but are in reality only lightly armored and designed for long-distance indirect fire—would be the first U.S. gun artillery approved for sale to Taiwan in over twenty years, following 146 older M109A5 howitzers delivered in the late 1990s.

This marks the first major arms sale to Taiwan approved by the Biden administration, signaling to Taipei and Beijing that he would continue to greenlight exports of major weapon systems to Taiwan begun under the Trump administration. However, possibly in an effort to modulate the temperature, the Defense Security Cooperation Agency approved only forty units, not the one hundred artillery systems Defense Minister Yen Teh-fa indicated Taiwan was seeking in 2019.

The Paladin’s maximum range of eighteen miles, or thirty miles using rocket-assisted ammunition, is too short to threaten Chinese military units in the mainland, meaning its sole role would be to defend Taiwan from an amphibious invasion. Beijing’s objection is thus that improved artillery makes seizing the island by force incrementally more difficult.

An ordinary 155-millimeter high explosive shell fired by an antiquated howitzer can still kill out to a radius of fifty to eighty, with some risk to life extending up to 200 meters away.

But in a modern high-intensity conflict, artillery units must be able to “shoot and scoot” within a matter of minutes, as shell-tracking radars, surveillance drones and command-control networks allow adversaries to retaliate extremely quickly with lethal counter-battery fires.

In these regards, the M109A6 improves significantly over the A2 and A5 variants, with its ability to deploy fore in just one minute, then surge fire three to four rounds in one minute if necessary, and then promptly move to a new position. The fire control and navigation systems in its new turret allow more rapid and precise targeting calculations too.

But historically artillery units fired hundreds of shells in lengthy fire missions because the odds of individual shells landing on target were low. Indeed, an unguided round from an M109 lands only on half the time within a 267-meter radius of the designated target at maximum range!

Here’s where the 1,698 Precision Guidance Kits (PGKs) Taiwan is authorized to purchase come in. The M1156 PGKs are basically small moving guidance fins and a hi-tech fuse that troops in the field can fit to a regular shell, allowing the projectile to correct its course towards a designated GPS coordinate. In tests of the M1156 PGKs, most shells have landed within ten or even five meters of a designated target.

Though undeniably pricy at $10,000 to $20,000 per kit, the M1156s-enhanced shells are thus far more likely to land on target, which is vital when only a brief volley can be fired before repositioning. Such precision fires also make it possible to hit targets closer to friendly troops and mitigate risks of civilian casualties when fighting near populated areas.

A downside of the M1156, though, is reliance on GPS, access to which may be disrupted in a high-intensity conflict. Supposedly “anti-jam” PGKs with improved ability to work in an a “GPS degraded environment” are in the works.

An attempted invasion of Taiwan would be won or lost primarily in the air and at sea. Taipei would have to mount a delaying action to buy time for U.S. forces to come to its defense—though even that is not strictly guaranteed.

However, if Taipei’s ground defenses are too weak, than even heavily damaged PLA amphibious and airborne forces might still secure a foothold on the island and seal Taiwan’s fate. Thus, Taiwan’s ground forces must train to accomplish what the German army could not at the battle of Normandy in 1944: swiftly counterattack and overrun any beachheads or air-landing zones, preventing PLA landing forces from forming a defensible base and capturing port facilities through which heavier PLA forces could land.

This is a feat Republic of China Armed Forces pulled off in their successful defense of Kinmen island against Chinese-led forces in 1949 but failed to do the same in the Battle of Hainan (also 1949) and the Battle of Yijiangshan Islands (1955).

The invasion defense scenarios grows ever more daunting with time, however. The PLA Navy has grown more capable and is rapidly expanding its fleet of Type 075 amphibious carriers and smaller Type 071 amphibious transport docks to deliver troops by sea. And on land China disposes of hundreds of short-range ballistic missiles and long-range rocket artillery systems that could bombard targets across Taiwan in a war, potentially destroying Taipei’s air force on the ground.

Taiwan’s rocket artillery is more modern. Besides the forthcoming high mobility artillery rocket systems, it includes around fifty-six indigenous RT-2000 Thunderbolt MLRSs capable of firing 117-, 180- and 227-millimeter rockets, the latter out to a range of twenty-eight miles. These are replacing older domestic Kung Feng VI MLRSs.

Together it theoretically amounts to a lot of firepower, but too much of it remains limited in range, precision and—for the towed weapons—mobility and survivability.

Thus, the M109A6s help bring more modern mobile capability to Taiwan’s artillery forces, and brings to the table GPS-guided shells precise enough to pose a serious threat to point targets like landing craft and armored vehicles (at least when they aren’t moving much).

Of course, forty relatively modern howitzers will not dramatically affect the unfavorable balance of power Taiwan’s armed forces must hedge against. However, they are a modest step forward towards modernizing Taipei’s ground forces for a possible conflict one can only hope is never fought.