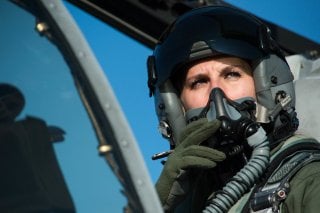 Here’s What You Need to Remember: Virtual reality (VR) could become part of the new reality in how U.S. Air Force fighter pilots are trained. In August 2020, the Air Force announced the inauguration of its new Virtual Test and Training Center (VTTC) at Nellis Air Force Base (AFB), Nevada. The $38 million center will allow Air Force pilots to practice advanced tactics that can replicate combat against near-peer nations and other adversaries.

However, private enterprise could also play a role in using the advanced technology to make pilot training safer and more cost-effective.

CBS News reported that among the private sector initiatives is one led by retired fighter pilot Dan Robinson, who is helming a new startup to develop augmented reality (AR) technology for fighter pilot training.

Robinson, who is a graduate of the UK Fighter Weapons School, the equivalent of the U.S. Navy's TOPGUN program said that a VR racing game was the inspiration for his startup, Red 6. However, he determined that it was the AR rather than full VR that could best serve as a training tool. The technology allows pilots to train against virtual aircraft while still maintaining full awareness of their real-world surroundings.

In this way, the pilots could train in actual aircraft and would "see" enemy fighters, thanks to AR technology. Instead of "dogfighting" against an actual aircraft, which could put both at risk, pilots would fight the notional aircraft far more safely.

Traditional U.S. military flight training is expensive, costing about $40,000 per hour to keep an F-22 Raptor fighter jet in the air, also risky, with more than 130 service members killed in aviation accidents from 2013 to 2017.

The Air Force's Virtual Reality Procedures Trainer, which is being used by student pilots to train for combat at Barksdale AFB, Louisiana, was designed to reduce human bias in instruction, provide better access to training for student pilots, and give students immediate feedback that lessens the chance that they develop poor habits in the early phases of training.

The technology isn't just for pilots either—VR is being used to transform the way C-130J Super Hercules aircraft maintainers learn and perfect their craft at the Dyess AFB, Texas, which this year developed the largest VR room in the Air Mobility Command.

"This effort started from the ground up, and now, we are working with two major commands and have a VR room with its own unique and innovative design," said 317th MXG instructors Tech. Sgt. Timothy Hogge, who worked with civilian software developers to write the course curriculum in developing the lab.

AR and VR technology are also being used to address the very serious issue of pilot shortages. In August 2020, the Air Force addressed the downward trend in pilot manning through new initiatives to increase "pilot production," utilizing the Pilot Training Next virtual reality (VR) and artificial intelligence (AI) program.

The VTTC will also address pilot production, where pilots can simultaneously train together in both live and virtual environments. VR technologies, along with increased simulator time, are being adopted to allow student pilots to better progress at their own pace.