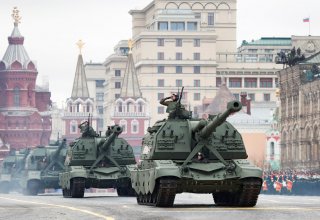 Here's What You Need to Remember: The Raad-1 is a classic example of Iranian weapon platforms—a strange mixture of legacy equipment repackaged and spun as “Iranian.”

The Iranian arms industry is a mashup of vintage American systems, legacy Soviet equipment, and a smattering of Chinese and North Korean imports. Much of Iran’s ground (and air!) equipment is quite old, and some of it a strange combination of Russian main guns and other parts mated hulls the guns were never intended for. The Raad-1 is just such a system.

The Raad-1 is a mixture of Soviet and domestic Iranian equipment. For a turret, the Raad-1 has a 2S1 Gvozdika turret mated to an Iranian Boragh armored personnel carrier hull. Though the exact specifications of the Raad-1 are hard to determine with certainty, a good estimate of its capabilities can be inferred by looking at what is known about the domestic hull and foreign turret.

The Gvozdika is a 122 millimeter self-propelled howitzer that was originally fielded in the early 1970s. Interestingly for a self-propelled howitzer, it’s amphibious. The Gvozdika had decent range for its time, firing a standard high-explosive projectile 15+ kilometers, or over 9 miles. This range could be extended with rocket-assisted projectiles out to nearly 30 kilometers, or 13+ miles.

Now things get confusing. The Boragh is believed by some to be an improved Iranian version of the Chinese Type 86 APC—which is itself a copy of the Soviet BMP-1 infantry fighting vehicle. In addition to this convoluted pedigree, the Boragh may even use road wheels from the American M113 APC. It’s thoroughly confusing.

There are several Boragh variants that differ slightly, but generally fall into an anti-tank role, anti-aircraft, armored personnel carrier, or a mortar carrier. As I previously wrote, the anti-tank capability is ensured by the Toophan missile, a high-quality reverse-engineered copy of the American TOW missile.

The Boragh is equipped with a diesel engine that has a respectable 330 horsepower output, giving it good on and off-road capabilities. It has enough internal volume to carry 8 fully equipped troops in addition to three crew members.

The Raad-1 fuses these two very different technologies into one platform that apparently works. The crew of four (loader, gunner, driver, and commander) have access to the interior via the rear. Modest rolled steel armor protects the crew, though only from small arms and artillery shell splinters.

The Raad-1’s engine is housed in the front of the hull, giving the crew a slightly better amount of protection than if they rode in a forward configuration. The turret is mated to the hull near the rear, above the crew compartment.

Judging by the Gvozdika, the Raad-1 probably has a similar maximum firing range of 15-plus kilometers or so, though the Raad-1 may suffer from reduced range and mobility, thanks to insufficiently wide tracks that may sink in soft or loose soil.

Either way, the Raad-1 is a classic example of Iranian weapon platforms—a strange mixture of legacy equipment repackaged and spun as “Iranian.”