The Tu-160M: This Old Russian Bomber Is Getting Major Upgrades 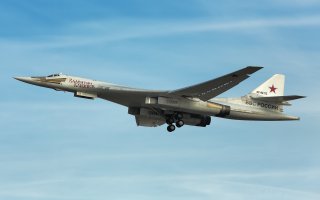 Here's What You Need to Know: The question now is whether the cash-strapped Kremlin can afford to buy a fleet of the latest Tu-160Ms.

Developed in the 1970s by the Tupolev Design Bureau in the Soviet Union, the Tu-160 “White Swan” remains the largest and heaviest Mach 2+ supersonic military aircraft ever built and the fastest bomber in use today. Russia has been steadily upgrading its fleet of missile-carrying Tu-160s and the most recent test occurred just before the New Year.

A second experimental sample of the “fundamentally upgraded” Tu-160s began ground tests at a flight test station of the Gorbunov aircraft plant in Kazan on December 30.

“The second plane is on the way,” a source in Russia’s defense-industrial complex told Tass. “Testing is in progress at the flight test station.”

According to the reports the test aircraft was converted from a standard Tupolev-160. This latest test highlights Russia’s commitment to the Cold War bomber. At the beginning of November 2020, the first fundamentally upgraded Tu-160, equipped with new NK-32-02 engines took part in test flight from Gorbunov plant. The United Aircraft Corporation, which has been overseeing the upgrade of the Tu-160, said that during the flight various systems were tested. This included the aircraft’s primarily systems as well as radio-electronic equipment. In addition, the performance of the NK-32 engines of the 02 series were also assessed.

The Russian aircraft outwardly resembles the United States Air Force’s Rockwell B-1 Lancer—and while it is true that the development of the B-1 spurred the Soviets to develop the “White Swan,” the appearance is where the similarities essentially end. Both have swept wings, and the ability to reach supersonic speeds, but the B-1 Lancer is actually smaller and was developed to operate as a bomber in the most classic sense, while the Tu-160 was designed to operate as a stand-off weapons platform.

The Tu-160 is capable of launching missiles from its bomb bay doors and hitting speeds of Mach 2+, but it has no defensive weapons—the only Soviet-designed bomber not to carry any. Instead, it was meant to use its speed to reach its intended target and fly home.

The aircraft earned its “White Swan” nickname for the brilliantly white reflective coating that covers the entire airframe. Although it makes for an impressive and sleek looking aircraft, the coating was actually developed to protect the crew should it launch its nuclear payload. In theory, the coating would reflect some of the thermal energy (light) during a nuclear explosion. Whether that would actually do much in practice has fortunately not been put to the test.

Whereas the United States Air Force has been upgrading its fleet of B-1, B-2 and most notably B-52 bombers in recent years, the Russian Air Force actually decided to resume production of the upgraded Tu-160M in 2015.

In February of last year, the first fundamentally upgraded Tupolev-160M Igor Sikorsky, converted from a standard Tupolev-160 version, performed its first flight. According to Tass, that aircraft was equipped with new flying and navigation equipment, onboard communication system and control system, radar and radio-electronic resistance complex.

The question now is whether the cash-strapped Kremlin will actually be able to buy a fleet of the latest Tu-160Ms. Still, it could be an affordable alternative to developing a replacement.