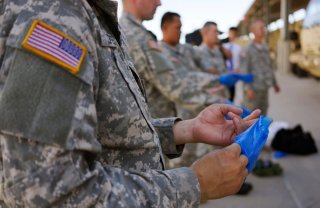 Here's What You Need To Remember: United Assistance gave the U.S. valuable lessons in strengths and pitfalls of mobilizing the military to fight infectious diseases—highlighting that major interventions requires a lead time to get rolling.

By September 2014, Liberia appeared on the verge of collapsing before the ravages of the Ebola virus—a horrifying disease infamous for escalating from flu-like symptoms to hemorrhaging that cause gruesome external and internal bleeding and vomiting, resulting in death in 50 to 90 percent of cases. President Ellen Johnson Sirleaf shut down public life in the nation, a measure that should now sound grimly familiar to a nation bracing itself to suppress COVID-19.

As the situation deteriorated, the U.S. Army’s Africa Command received a series of unprecedented orders. On September 12 it was asked to build a twenty-five bed hospital in the Liberian capital of Monrovia to help treat Liberian doctors and healthcare workers—150 of whom would die fighting the outbreak. Then three days later the mission, dubbed Operation United Assistance, was expanded to incorporate over 3,000 troops who would build seventeen hospitals across Liberia and conduct mobile laboratory testing.

The 2014-2015 Ebola outbreak, detailed in this earlier article, took root in the West African states of Guinea, Liberia and Sierra Leone. The U.S. targeted Liberia in part due to strong historical ties with that state, which was founded by free African-American who elected to return to Africa early in the 19th century.

But fighting Ebola wasn’t “merely” the right, humane thing to do; it was also self-interested. Should the epidemic fall out of control, there was terrifying possibility it would spread across West Africa to a populous country like Nigeria, and from there to the rest of the world.

The Depart of Defense had never mobilized abroad on a disease response mission. There was an evident danger that troops could become infected with the disease and bring it back, as had happened to several foreign aid workers fighting Ebola. So the Pentagon decided its mission would not include direct patient care. Instead it focused on building physical medical infrastructure, supplying equipment, and training Liberian healthcare workers.

Initially, Marine MV-22B Osprey tilt-rotor aircraft—combining the vertical-lift ability of a helicopter with the speed and range of a light airplane—were redeployed from Spain to begin moving supplies locally. Air Force C-130J and C-17 transport aircraft began transporting personnel overseas to Robert Airport in Liberia and to a hub in Dakar, Senegal.

Meanwhile, the headquarters of the 101st Airborne Division, a unit which had parachuted into Normandy, was tapped to lead the effort under its commander, Maj. General Gary Volesky. The 101st brought with it CH-47F and UH-60 helicopters to relieve the Ospreys. The aircraft ferried supplies for both the military and NGOs in country, delivering in a few hours what would have taken weeks prior according to an officer.

A post-mission analysis notes that U.S. forces assigned to the mission initially were unprepared for the “austere conditions” due to “diminished” expeditionary skills and practices. Rainy, muddy weather delayed construction of ETUs from five to eight weeks.

As construction of ETUs began across Liberia, six mobile testing units began processing results of potential Ebola victims, producing test results in a few hours that had taken days prior.

Throughout the entire mission, stringent measures were taken to ensure U.S. troops avoided infection, starting with a no-touch and three-foot-separation policy with local nationals. Each soldier had their temperature taken in the morning and evening to screen against possible infection. Two units were dedicated solely for biosurveillance of possible disease vectors and testing of food and water.

For a good measure, troops returning from Liberia were subject to a 21-day quarantine. Fortunately, no personnel were infected.

Late to the Party

By December 2014, U.S. forces in Liberia reached their 3,000-personnel target—mostly drawing on Army personnel, though dozens of airmen and sailors were also present and 166 contractors. The first of the ETUs, meanwhile, came online on December 22.

By then it had become clear the infection had peaked in September, and much of the added medical capacity could not be used. Starting in November, the number of planned ETUs dropped from 17 to 10, now with 50 beds instead of 100.

Even that proved excessive. An article in the New York Times note that only 28 patients were treated across the 11 medical facilities built. A Liberian official admitted the effort “came too late”, but added the intervention “has built our capacity to sustain the gains we had,” he said, “and that’s why we are here today.”

The MMU eventually treated 42 healthcare workers, of whom eighteen were diagnosed with Ebola and nine died.

The 34th Infantry Division in the Minnesota National Guard, in line to relieve the 101st, never deployed as the program was rapidly scaled down by February 2015. The outbreak was finally declared defeated in May 2015.

But an academic study finds that local measures undertaken by Liberians themselves had won the fight against Ebola before American troops had arrived:

“…the epidemic curve decreased before any of the US-funded ETU beds opened (or were even proposed), and the majority of these beds were never used. ETUs did, however, play a crucial role in treating and isolating patients and likely helped to reduce case-fatality rate…Future efforts to strengthen health systems should focus on building community capabilities and local leadership, and not simply on building more physical infrastructure.”

To be fair, in early September, decision-makers couldn’t know the outbreak in Liberia was about to peak. Had cases continued mounting, those ETUs might have been hailed for saving thousands of lives, instead of proving redundant.

The biggest impact was the announcement itself and having those boots on the ground, even if the US military hadn’t done anything else. The psychological impact was transformative to the Liberians. You have to understand the environment at that point in time: by July, August, September, there were dead bodies in the street, in the ocean. People were beyond afraid; they were despairing. The change was palpable within 24 hours of the president’s announcement.

Regarding the Monrovia Medical Unit, an officer similarly argued:

“We’ve heard that healthcare worker recruitment efforts were struggling until the [United States] said that we would do the MMU and provide care to US medical standards for infected healthcare workers… From that point of view, the MMU has been a raging success, because it has made it easier on the international partners to recruit healthcare professionals to come to the country.”

United Assistance gave the U.S. valuable lessons in strengths and pitfalls of mobilizing the military to fight infectious diseases—highlighting that major interventions requires a lead time to get rolling.

That lead time can be decreased by maintaining institutional knowledge and infrastructure to respond for future crises, such as by appointing a senior officer on the Joint Chief of Staff to tackle global health security and biodefense. However, that position was eliminated in 2018 by then national security advisor John Bolton.

Additionally, it’s vital to intervene earlier so that additional capacity can operationalize well before the peak. Of course it’s human nature—and especially typical in the political arena—to delay a response until a crisis is truly severe and undeniably manifest. Unfortunately, by the time the proverbial smoke is in the air, the long lead time for a response may prevent the fire brigade from arriving in time.

“DOD should examine current policies and authorities associated with foreign humanitarian assistance and adjust accordingly. While highly lethal, Ebola Virus Disease is not highly contagious. Another, more virulent disease may not allow the same lead time to resolve roles, responsibilities and policy issues.”

Sébastien Roblin holds a master’s degree in conflict resolution from Georgetown University and served as a university instructor for the Peace Corps in China. He has also worked in education, editing, and refugee resettlement in France and the United States. He currently writes on security and military history for War Is Boring. This article first appeared in April and is being republished due to reader interest.