The U.S. Marine Corps of the Future is in the Making, Thanks to China 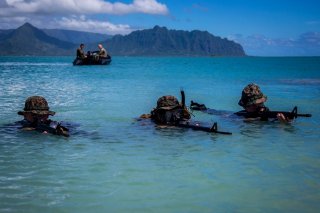 Here's What You Need to Remember: A Marine Littoral Regiment, about 2,200 Marines in total, would be made up of three separate but interconnected groups, a combat unit, an anti-aircraft team, and a logistics element.