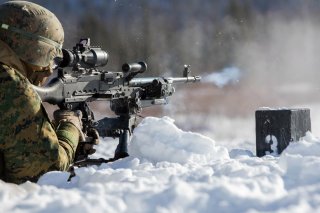 Here's What You Need to Remember: In recent months the service has moved to deactivate all of its tank battalions, drastically reduce its artillery inventory, and field new amphibious vehicles to bring Marines from ship to shore. With a potential near-peer fight with China, the U.S. Marine Corps took a page from their past and recently reactivated the 1st and 2nd landing support battalions.

Over its 245 year history, the United States Marine Corps has been deployed to regions that might seem like tropical paradises, were the Marines are seen not having to do the dirty job of fighting America's enemies. While extreme heat and high humidity have been a foe of the Marine riflemen in many conflicts, so too have extreme cold and high winds, which is why U.S. Marines of the Marine Rotational Force Europe 21.1 (MRF-E), Marine Forces Europe and Africa recently took part in joint operations in northern Norway.

During the annual Reindeer II, a major Norwegian Army-led field exercises north of the Arctic Circle, the Marines and soldiers took part in bilateral arctic training, which included live-fire drills on snow and snow-covered ranges. According to Defence-Blog, the Marines and their Norwegian partners utilized snowshoes and cross-country skis, worked to keep ammunition dry and even dealt with issues like deploying weapons in powdery snow as well as facing cold and wet conditions. The exercises were led by Norwegian Army instructors.

“Norway offers challenging terrain and unique training opportunities to improve our cold-weather and mountain-warfare skills, enabling our force to fight and win in arctic conditions,” said Lt. Col. Ryan Gordinier, commander of 3rd Battalion, 6th Marine Regiment in advance of the bilateral exercise, which began on November 23. “The ‘Teufelhunden Battalion’ looks forward to continuing our historic relationship and strengthening our alliance with the Norwegian military.”

Gordinier added that Norway offers conditions that can't be replicated at home stations back in the continental United States and said that the deployment provided the Marines with experience climbing up and down mountains, or dealing with extreme arctic temperatures.

This marked the first rotation of shorter MRF-E deployments, which were first announced by the Marine Corps in August 2020. Marine Rotational Force-Europe's deployment synchronized with the Norwegian Armed Forces' arctic training, which provided increased operational flexibility for the Marine Corps while it improved interoperability and strengthened defensive capabilities among partner forces. The Marines were able to learn valuable lessons in dealing with extreme arctic and mountainous terrain.

“One of the most important lessons we have learned is that we need a mutual understanding of what the different military terms mean, so that when an order is given, we can both act in the same way,” said Major General Lars S. Lervik, chief of the Norwegian Army, and Brigader Pål E. Berglund, commander of Brigade North, Norwegian Army according to Defence-Blog. “The level of integration allies have with the Norwegian Army today is very good, and I have never seen it this good before.”

The Marines may want to keep their cold-weather gear and camouflage at the ready. Marine Rotational Force-Europe 21.1 is expected to operate in Norway several times over the coming year, with a larger follow-on rotation scheduled in early 2021. The Marine Rotational Force plans to conduct various exercises alongside allied forces for continued interoperability and arctic training.

The United States Marines Corps is undergoing a transformation. In recent months the service has moved to deactivate all of its tank battalions, drastically reduce its artillery inventory, and field new amphibious vehicles to bring Marines from ship to shore. With a potential near-peer fight with China, the U.S. Marine Corps took a page from their past and recently reactivated the 1st and 2nd landing support battalions. However, that doesn't mean that every fight could be under the tropical sun, which is why exercises such as Reindeer II remain so critical to keeping the Marines on their toes—even if that is in deep powdery snow.