The U.S. Military's Superpower IS Its Special Forces 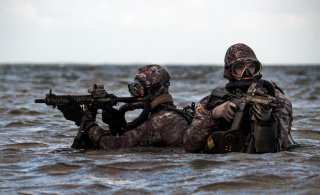 Here's What You Need To Remember: Another challenge lies in the shifting priorities of the Defense Department. While SOCOM will likely remain at the forefront of future counter-terrorism/insurgency operations in Africa and West Asia, the Pentagon is reorienting itself away from such missions towards preparing for possible ‘great power’ conflict with Russia and China.

Raiders trainees undergo a three-stage screening, followed by a nine-month training program in skills ranging from demolitions, diving, foreign languages, close-quarters combat and wilderness survival. Raiders have been involved in actions ranging from brutal urban warfare against ISIS in Mosul, Iraq, and Marawi in the Philippines, to counter-terror actions in Mali.

But of those that pass an initial screening, only one out of three make it through the initial physical conditioning unit, the third week of which is known as ‘Hell Week,” in which trainees perform 20 hours of intense physical activity per day.

This article first appeared in August 2020 and is being republished due to reader interest.