The U.S. Navy's Ghost Fleet: How Do You Really Count Robot Ships? 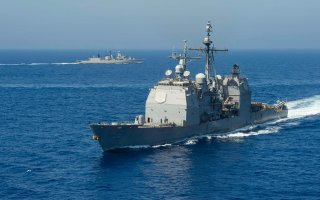 Here's What You Need to Know: Balancing the operational needs of the present with the technological needs of the future is a difficult equation to solve.

Above all, LUSVs could reduce the overwhelming operational burden placed on the Navy’s over-worked destroyers, cruisers, littoral combat ships, and planned-for frigates.