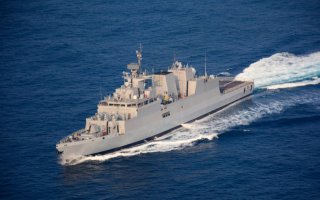 Here's What You Need to Know: The Project 28 Kamorta-class is viewed as an important demonstration of India’s ability to design and build modern warships.

In October 2020, the Indian Navy commissioned the INS Kavaratti, the last of four domestically-built anti-submarine warfare (ASW) stealth corvettes of the Project 28 Kamorta-class that were developed by the Indian Navy’s Directorate of Naval Design (DND). The warship was part of the New Delhi government’s “Make in India” initiative. It was built by the Garden Reach Shipbuilders & Engineers (GRSE), Kolkata.

The warship was commissioned into the Indian Navy by Gen. Manoj Mukund Naravane, Chief of the Army Staff at Naval Dockyard, Visakhapatnam.

“The ship portrays our growing capability in becoming self-reliant through indigenization,” the Indian Navy said in a statement shared on social media. “With the induction of Kavaratti into its fold, the Indian Navy’s preparedness will be enhanced.”

The Indian Navy has described the ASW corvette as a potential game-changer, should Chinese submarines attempt to make sorties in the eastern Indian Ocean.

The Project 28 Kamorta-class has been seen as an important demonstration of India’s ability to design and build modern warships rather than relying on receiving so-called “hand-me-down” vessels from other powers. Ninety percent of the materials used in the construction of the warships include indigenous content.

The Kavaratti was constructed using high-grade DMR 249A steel that was also produced in India and the complete superstructure of the ship was also built utilizing composite materials including locally sourced carbon fiber.

The use of those materials, combined with its unique “X shape” along with sloped surfaces, has enhanced its stealth features that result in a greatly reduced Radar Cross Section (RCS). The Indian Navy has stated that the ship’s advanced stealth technology makes the warship less susceptible to detection by the enemy.

Additionally, the ship’s weapons and sensors suite are reported to be predominantly indigenous, and further showcase the Indian nation’s growing capability to develop this advanced technology. The weapons and sensor suite was designed to detect and combat enemy submarines, while the corvette can also engage enemy aircraft and surface vessels. According to Naval News, the major equipment/systems developed indigenously include the Combat Management System, Torpedo Tube Launchers, and Infra-Red Signature Suppression System.

Weapons include a 76mm main gun, two AK-630M 30mm CIWS, two RBU-6000 anti-submarine rocket launchers, and four 533mm torpedo launchers. The warship displaces 3,300 tons, and she is 109 meters in length and 14 meters in breadth. The ship is propelled by four diesel engines.

She is manned with a team comprising twelve officers and 134 sailors. Commander Sandeep Singh has been named the warship’s first commanding officer (CO), and the vessel will enter service with the Eastern Fleet under the Eastern Naval Command (ENC)

The Kavaratti was commissioned as a combat-ready platform and has completed its sea trials of all the systems fitted onboard. The warship was named after the capital of the Lakshadweep group of islands, and she was also named in honor of a previous INS Kavaratti, an Arnala-class missile corvette that saw service during the Indo-Pakistani War of 1971. The new INS Kavaratti will join three other ships of the same class.

In July 2020, the U.S. Navy’s Nimitz Carrier Strike Group operated with the ENC, and that included the lead warship of the Project 28 class, the INS Kamorta.