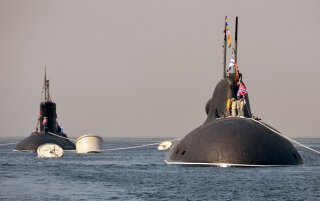 Here's What You Need To Know: There has been a growing consensus that the Husky class is less of a pure attack submarine and more of a multi-purpose vessel that can fill several roles depending on its loadout.

With the Yasen-M class yet to enter service, Russia’s navy is already looking ahead to its fifth generation of attack submarines.

It was first revealed toward the end of 2014 that Russian design bureau Malakhit is working on a new nuclear attack submarine, which was later identified as the Laika (Russian for “Husky”) class. Concrete details are sparse, but defense observers have managed to piece together Russian news reports and industry insider leaks to get a rough approximation of how the project will develop over the coming years.

The submarine will reportedly boast a displacement of just over 11,000-13,000 tons, a top submerged speed of 35 knots, and a hull designed partly from composite materials. It will feature standard-issue P-800 Oniks and  3M14 Kalibr cruise missiles, as well as Russia’s upcoming new Tsirkon hypersonic cruise missiles.

“There is little doubt that our ship-building industry is interested in a highly maneuverable, fast, relatively light submarine with a significantly reduced crew size, new types of weaponry and technology, with sophisticated automation. Despite this, one of the biggest goals is to reduce the submarine’s underwater noise levels by several orders of magnitude in comparison to previous classes,” defense expert Constantin Makienko told Russian news outlet Gazeta.ru

Nevertheless, there remains some confusion over the Husky’s intended purpose.

Initial reports framed it as a cheaper, more easily mass-producible counterpart to the Yasen-M. Splitting Russia’s nuclear attack submarine roster between two differently-priced models seems like a sensible financial strategy, given that a serial Yasen boat costs a whopping estimated $1.6 billion--the Yasen project looks to be a colossal drain on Russia’s relatively modest naval budget, in part due to its raft of advanced design features. Other reports paint the Husky as a highly advanced submarine in its own right- one that could potentially replace the Yasen project altogether.

Most recently, there has been a growing consensus that the Husky class is less of a pure attack submarine and more of a multi-purpose vessel that can fill several roles depending on its loadout. The latest reporting suggests that there are two separate Husky models in the works: one Kalibr-equipped version for dedicated anti-submarine warfare (ASW), and a Tsirkon-equipped model for operations against surface vessels like enemy aircraft carriers. It is unknown if these two variants will feature any other differences beyond simply different weapons.

Still, other leaked materials suggest that the Husky also boasts limited strategic capability with onboard submarine-launched ballistic missiles (SLBM’s), potentially making it more versatile than its Yasen-M counterpart. If true, it remains to be seen to what extent an SLBM-equipped Husky variant will overlap with the Borei class, the Russian Navy’s flagship modern strategic submarine.

With the Yasen-M project suffering from recurrent production delays and development setbacks, it is unclear when the fifth-generation Husky class will enter serial production or how many units can be expected. The lead boat in the Husky class is reportedly planned to be built by the end of 2030.