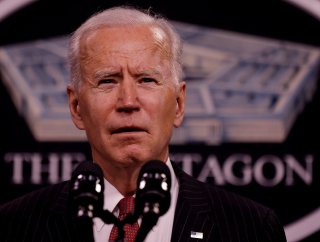 Here's What You Need to Remember: Critics of the budget say the proposal cuts the Army by as much as $4 billion, reduces the Navy’s fleet size goals from more than five-hundred-ships to the status quo of three hundred or less and does not fund enough F-35 jets in light of the evolving threat environment.

There is a long way to go before any proposed defense budget becomes law, given that a host of congressional committees need to “mark up” the budget, analyze programs, propose alternatives and then ultimately reconcile competing views in a collaborative “conference” process.

There have, over the years, been many instances wherein programs are massively cut by certain committees only to then have the funds restored later in the deliberative process. However, it is not clear just how much the lower numbers offered in the 2022 defense budget can be adjusted throughout the process, given that Democrats control both the House and the Senate. However, many center-leaning Democrats have a long history of favoring strong budget support for the military, and concern about threats from China and Russia certainly extends to both parties.

This is what certain Republican congressional leaders are hoping for as they seek to address what they say is a “dangerous” 2022 budget proposal.

Critics of the budget say the proposal cuts the Army by as much as $4 billion, reduces the Navy’s fleet size goals from more than five-hundred-ships to the status quo of three hundred or less and does not fund enough F-35 jets in light of the evolving threat environment.

“This represents a retreat. I think we can have bipartisan leadership on this,” Sen. Dan Sullivan (R-Alaska), ranking member of the Subcommittee on Readiness, told a group of reporters during a press availability for Senate Republicans to address what they see as a pressing, urgent security concern regarding the budget. “We are unified that we need to protect the country and american jobs. The Congress has the power of the purse. The president’s suggestion with regard to these figures is not the last word.”

Stressing his opinion that Congress needs to utilize its “power of the purse” on a bipartisan basis to “reverse these dangerous and disastrous defense cuts,” Sullivan referred to ongoing efforts to garner bipartisan support for legislation aimed at revising the proposed budget.

Sen. Joni Ernst, a veteran of Operation Iraqi Freedom, said she is worried the budget might send a demoralizing message to the force.

“This is going to lead to serious national defense setbacks and lead our warfighters to think they no longer have the upper hand,” Sen. Joni Ernst, (R-Iowa) said. “The last thing we should be doing is cutting this budget. We all know the cost of freedom. The President and the Democrats should commit beyond ‘adequate.’ We need to be bold and stand strong for the military so we are not sending the wrong message.”