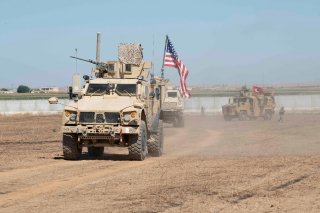 Here’s What You Need to Remember: President Joe Biden has repeatedly pushed the United States to end its “forever wars” in the Middle East, leading some observers to argue that a withdrawal from Syria could be next.

Given the United States’ high-profile withdrawal from Afghanistan in August, and its commitment, at least in theory, to leave Iraq, speculation has mounted that a similar withdrawal might take place in Syria, where roughly nine hundred U.S. troops remain.

American troops in Syria are concentrated in the predominantly-Kurdish northeast, where they have assisted the Syrian Democratic Forces (SDF) militia in its war against the remnants of the Islamic State (ISIS). U.S. troops were first dispatched to Syria, without the permission of the Damascus government of Bashar al-Assad, in 2014 and 2015 to roll back ISIS’s self-proclaimed caliphate.

After the territorial defeat of ISIS, however, U.S. troops inadvertently became involved in other regional disputes—primarily the ongoing clashes between Turkey, bordering Syria to its north, and the Kurdish “People’s Protection Units” (YPG), whose leadership has long connections to the Kurdistan Workers’ Party (PKK), a Kurdish nationalist movement that has previously conducted attacks within Turkey.

While the PKK is considered a terror group by both Turkey and the United States, the two countries differ with regard to the YPG, which played a critical role in ISIS’s defeat. The United States has directly aided the YPG, angering Turkey, and Turkish president Recep Tayyip Erdogan has pressed Washington to remove its troops from Kurdish areas, allowing Turkey to intervene.

Ultimately, although Trump promised a withdrawal from Syria, the controversy surrounding the incident led him to continue to station troops there through the end of his presidency. President Joe Biden, however, has repeatedly pushed the United States to end its “forever wars” in the Middle East, leading some observers to argue that a withdrawal from Syria could be next.

At the same time, however, experts have observed that there are complicating factors, prominently including America’s commitments to regional partners. Al Jazeera reported on Tuesday that officials in Washington had indicated the United States had no immediate plans to leave, and that “assurances” had been transmitted to SDF leaders that the United States would remain.

A second complicating factor is public opinion on the U.S. presence in Syria. While a majority of Americans supported the U.S. withdrawal from Afghanistan, polls suggest that most are in favor of a continued counterterrorism role for U.S. troops in Syria and Iraq.

Other considerations include the political fallout that a second withdrawal would cause for the Biden administration, which suffered heavily in the polls for its perceived mismanagement of the first one, and the narrow scope of the U.S. mission in Syria when compared with “nation-building” in Afghanistan and, prior to 2011, Iraq.