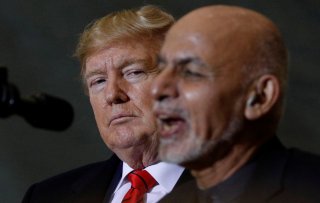 Dissension among Democrats over domestic policies has been much in evidence since the election and has appeared in recriminations over their party’s disappointing result in congressional races. On one hand are those who preach the art of the possible amid the power politics of a badly divided nation. On the other hand are those who ask what is the point of attaining power if it is not used to try to do principled things on behalf of the nation, notwithstanding the possibility of failure.

Power-versus-principle disputes enter foreign policy debates as well, often with regard to matters such as shaping U.S. relations with states that have repulsive regimes that grossly violate human rights but offer cooperation on other matters important to the United States. A foreign policy division that is more analogous to the intra-Democratic divisions over domestic policy, however, and is most likely to arise during Joe Biden’s administration concerns how rapidly the administration should extract the United States from what have become known as the forever wars.

A strong case can be made for a major reduction of the current U.S. military presence and military operations abroad. Impatience in executing military retrenchment, however, could become a damaging complication for a new administration that will be saddled with an extraordinary array of problems and damage left by its predecessor. Biden’s administration will have legitimate reasons to go more slowly than many of its supporters might like in extracting the nation from the forever wars—reasons that do not detract from the general case for extraction.

The manner and pace of retrenchment can significantly affect conditions, in ways that in turn affect U.S. interests, in some of the areas of conflict involved. Afghanistan is a major example. U.S. interests do not justify having made Afghanistan the scene of America’s longest war. The notion that this country forever has a special place as a base for anti-U.S. terrorism, different from any other place where bad guys might hang out, does not hold water. But how United States forces exit Afghanistan—as diplomats and Afghan factions negotiate about a new Afghan political order—will make non-trivial differences in what sort of Afghanistan emerges at the other end. Although those differences do not warrant never exiting Afghanistan, they may be sufficient to warrant a specific way of exiting, which is not necessarily the fastest way.

Like any other president, Biden will have limited political capital to spend on all the things he wants to do and limited bandwidth for explaining to the public what he is doing. Any change from the status quo entails an expenditure of time and attention as well as the political capital, and that applies to military retrenchment as much as any other change, however much it may represent savings in other resources. The competition for the president’s attention and political capital will be fierce from other necessarily high priorities, such as bringing the coronavirus pandemic under control.

Also worth considering is the impact of Biden’s foreign and security policies on domestic U.S. politics, including what opponents may try to turn into issues in future election campaigns. Anything that provides fodder for political rhetoric about “who lost” Afghanistan or Iraq or a “war on terror” or something else would tend to weaken the president. This observation may sound to some ears like a return to crass party politics that puts winning elections ahead of everything else. But such rhetoric about “losing” countries, to the extent it persuades voters, would weaken not only the president but also the cause of restraint and military retrenchment.

A further complication is that Biden’s just-defeated opponent had made ending the forever wars part of his own rhetoric. Many people for whom such an end is important saw Donald Trump as a vehicle for their hopes in 2016 and dismissed Hillary Clinton as an inveterate hawk. But as with so many other things with Trump, this was play-to-a-crowd rhetoric rather than principled policy. There never was any strategy behind the rhetoric. There still isn’t, as Trump on his way out the door has impetuously sacked the leadership of the Department of Defense while abruptly trying to establish an eleventh-hour record of bringing troops home.

Contrast that approach with the carefully reasoned position that Biden took as Barack Obama’s vice president in arguing against a surge of troops in Afghanistan and in favor of a less costly counterterrorism-focused strategy there. Biden lost that internal debate in the Obama administration, but the contrast with Trump—in terms of who is interested in responsibly limiting overseas military involvement and who is not—is sharp.

As if one needed a reminder of that, there is the recent report that Trump had been asking for options for a military strike on Iran. Such a strike would not just be extending existing forever wars; it would be starting a new war. Again the contrast is sharp with Biden, who intends to deal with the issue of Iran’s nuclear program not through war but by returning to compliance with the multilateral agreement that closes all paths to an Iranian nuclear weapon through diplomacy and international monitoring.

However noble is the objective of making U.S. foreign policy less militarist, pursuing that objective in a realistic manner means taking account of other priorities, constraints, and political facts. It also means realizing that the forever wars are not the product of an undifferentiated foreign policy blob in which differences between presidents and parties are insignificant.

Those who strongly believe in a less militarist U.S. foreign policy should not make the mistake of focusing narrowly on that one issue as if it were isolated from everything else a president does. The cause of restraint in U.S. foreign policy is no more immune to absolutism than are domestic issues with high emotional content such as abortion or racial justice. Biden should be supported, not hectored, as long as he pursues a policy of restraint in a responsible manner while addressing the mountain of other major tasks he will face, even if the pursuit sometimes may appear frustratingly slow.