Why China is "Ready to Fight Any Time" Over Taiwan 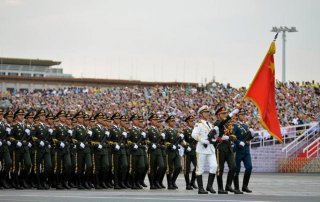 Here's What You Need to Remember: Given that Taiwan is merely 100 miles away from China, fighter jets or attack planes launched from mainland China will have no difficulty reaching the skies above Taiwan.

Leaders of the People’s Liberation Army (PLA) say China is “ready to fight any time” over the question of Taiwan, making familiar yet increasingly aggressive comments in response to escalating tension and stepped-up military exercises and combat drills in the area.

The newspaper went on to stress China’s war readiness and used aggressive language regarding the question of Taiwan.

“The PLA will resolutely defeat all external interference and "Taiwan independence" separatist acts, safeguarding national sovereignty and territorial integrity. There is only one China, and Taiwan is part of Chinese territory,” said Tan, as quoted by the Global Times.

While Chinese activity and war preparation drills near the coast of Taiwan have been going on for a long time, there is growing concern that China might be preparing for a massive amphibious assault upon Taiwan. The thinking may pertain to an intention to leverage proximity and speed advantages to seize Taiwan before its allies are in a position to intervene or respond.

This possibility is one potential reason why the United States has been selling M1 Abrams tanks and other defensive and offensive weapons to Taiwan. Should any kind of a beach landing be met with substantial armored resistance from Taiwan, China’s ability to advance upon a beachhead and make successful incursions into Taiwan might be deterred or simply challenged and delayed enough to allow enough time for the United States, Australia, Japan, and other allied nations to forcibly respond in defense of Taiwan.

Added to the equation is the circumstance that China has already fielded its second new Type 075 amphibious assault ship, a new generation of amphibious ships able to transport troops and weapons while launching aerial and even undersea drones to conduct forward surveillance operations.

Taiwan is roughly a hundred miles from mainland China, a distance certainly passable by Chinese amphibious assault forces and potentially reachable by land-launched ballistic missiles. However, Chinese amphibious assault ships, although likely supported by surveillance planes, drones and helicopters, do not appear to operate with an ability to launch and recover fast-moving fighter jets. China is reported to be developing a carrier-launched variant of its fifth-generation, stealthy J-31 fighter jet. But it does not appear to have a vertical-take-off-and-landing capacity similar to the U.S. Marine Corps F-35B fighter jet. This means that fixed-wing assets such as fighter jets would not be able to take off from approaching amphibious assault ships and would likely need to launch from a carrier or land base from within mainland China.

Given that Taiwan is merely 100 miles away from China, fighter jets or attack planes launched from mainland China will have no difficulty reaching the skies above Taiwan. This circumstance could make Taiwan vulnerable as it may not have many advanced air defense systems or a suitable countermeasure with which to respond. Taiwan does not operate F-35 stealth fighters and may not have air power sufficient to challenge or repel fifth-generation Chinese fighters in the event of an attack. An interesting 2016 report from RAND titled Air Defense Options for Taiwan seems to anticipate this, arguing that Taiwan's air force and air defenses are likely ill-equipped to counter a Chinese invasion from the air. The report recommends that Taiwan acquire more advanced, modern surface-to-air-missiles so China is “outnumbered in the air.”  This dynamic might explain why Japan is spending billions on F-35s and the United States makes a regular point of sailing F-35-armed carrier strike groups and amphibious assault ships in the region to be prepared for this contingency.

More recently, there has been a wide number of reports about various Taiwanese efforts to better arm itself against a Chinese attack. A report from Reuters earlier this year said Taiwan is in the process of acquiring U.S.-built Patriot missiles, however, while these weapons are effective as missile interceptors capable of stopping incoming ballistic missiles, they are certainly less effective against stealth aircraft.

Editor's note: This article mistakenly referred to the distance between Taiwan and China as 1,000 miles. The correct distance is approximately 100 miles. We regret the error. The final two paragraphs have been updated to account for this discrepancy.