A New Stealth Fighter? How Crafty China Got Its J-31 Jet 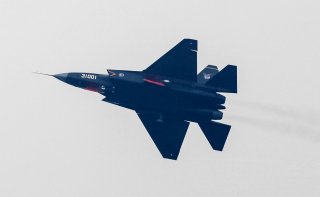 The photos, published by the China Times, show the prototype at an aircraft carrier building in Wuhan. The FC-31, also referred to as a variant of the Chinese J-31, has been in development for many years as China’s military maneuvers to rival the U.S. Navy and, more specifically, possibly attempt to outmatch America’s F-35 jet.

Overt and well-documented Chinese efforts to copy, steal or replicate U.S. weapons designs have been going back many years. Certainly, renderings of the J-31 jet do reveal visible similarities with the F-35 jet. While the J-31 jet’s dual-engine configuration mirrors an F-22 jet-type of configuration, given that the F-35 jet is a single-engine airplane, much if not all of it seems to parallel F-35 jet designs.

Many photos of the J-31 jet do show clear similarities to the F-35 jet, a development noticed as far back as 2014 in a congressional report detailing Chinese military progress called the U.S.-China Economic and Security Review Commission. The report cited a Defense Science Board finding that Chinese cyberattacks led to the theft of U.S. weapons specs, and a Washington Post report said one of the weapon’s systems stolen was the F-35 jet. The possibility and well-documented pattern of Chinese cyber espionage related to fifth-generation aircraft have long been on the Pentagon’s radar. A news report from 2018 cites that the Chinese J-20 design was likely the result of espionage. The J-20 jet, if slightly elongated, does appear to mirror elements of both the F-35 jet and the F-22 jet with its blended-wing-body configuration. But a closer look at the J-31 jet reveals an even more similar resemblance to the F-35 jet.

Interestingly, the Chinese media has cited similarities between the J-31 jet and the F-35 jet. A 2013 report from the Chinese government’s People’s Daily Online notes that the J-31 and F-35 jets use the same diverterless supersonic inlet (non-boundary layer-separated lane). The only major difference, the paper notes, is that the United States has an F-35B short-take-off and landing variant and that the J-31 jet uses two engines compared to the F-35 jet’s single-engine propulsion configuration.

A “non-boundary layer separated lane” for airflow, which does not break up or radically change airflow trajectory, could be intended to ensure smoother flight at high speeds while helping manage the temperature. Airflow fluctuations, particularly those that can become more turbulent, can result in the shifting of particles in the air surrounding the aircraft, thereby complicated heat management, scientists with the Air Force Research lab told me. While this is being looked at in the case of maintaining thermal management and flight trajectory for hypersonic weapons, it would certainly seem to have applications for stealth aircraft too. Smoother wing-body melded external designs, absent hard or protruding edges, clearly bring the added advantage of a smoother and cooler airflow boundary layer. Along these lines, a Global Times report published in 2019 details a few design changes to the J-31 jet that year, which, according to the photographs, show a smoother, less-jagged exterior behind the cockpit as opposed to earlier models.