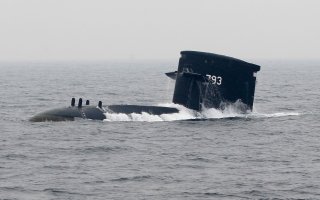 Here's What You Need to Know: Taiwan continues to invest in its national security.

As the People's Republic of China's People's Liberation Army Navy (PLAN) continues to increase in size, which could seriously threaten the Republic of China (Taiwan), the government in Taipei has announced it will start work to build the first of eight new domestically developed submarines. On Friday, Taiwan said it would move forward on the long-mooted project to bolster the island nation's defenses in the wake of China's rapidly modernizing military.

The PLAN has aggressively built up its navy, and now has more than 300 warships and submarines in service, with plans to expand it even further. That could pose a serious threat to Taiwan, which Beijing maintains is a rogue province – one it has vowed to bring under its control, by military force if necessary.

The Taiwan News, citing military experts, suggested that any Chinese PLAN invasion fleet would be highly vulnerable to a flotilla of modern submarines.

Those subs, which would be the first indigenously developed warships of their kind in the Taiwanese Navy's arsenal, will reportedly be constructed at the new specially-designed shipyard in Kaohsiung by Taiwan's CSBC Corporation.

"This represents a new milestone in the national submarine manufacturing plan," said Chang.

The newly planned eight submarines, which are expected to enter service in 2024, will likely replace the Taiwanese Navy's rapidly aging fleet of four submarines, including two Chien Lung-class submarines, the SS-793 Hai Lung (Sea Dragon) and SS-794 Hai Hu (Sea Tiger), purchased from the Netherlands in the 1980s; and two Hai Shih-class submarines, SS-791 Hai Shih (Sea Lion) and SS-792 Hai Bao (Sea Leopard), which were acquired from the U.S. in the 1970s and date back to the 1940s.

In January 2017, Taiwan announced that the decades-old Hai Shih would receive a retrofit allowing it to continue sailing until 2026. That $19 million retrofit was reportedly to improve the hull and the diesel vessel's "navigational elements."

Before she was Hai Shih, the boat was the U.S. Navy submarine USS Cutlass, a 1,570-ton Tench-class vessel that was launched on Nov. 5, 1944 during the Second World War. Her wartime service was brief, and Cutlass didn't even reach her first patrol zone near the Kuril Islands until the day after Japan capitulated. The submarine was sold to Taiwan in 1974.

The two newer submarines are also set to be upgraded by 2024, which could bring Taiwan's modern attack sub force to 10.

In With the New

It is estimated that Taiwan's eight new attack submarines will cost a total of US$16 billion, and some experts have suggested the money spent on Taipei on the boats is an investment in the nation's security.

"Their counter-coercive value should not be underestimated," Mark Stokes, executive director of the Project 2049 Institute in Virginia told Forbes last week.

While the PLAN may have an overwhelming numeric advantage over Taiwan, the Communist forces would have to mount an invasion across the Taiwan Strait, where submarines could give a defending force a significant advantage.