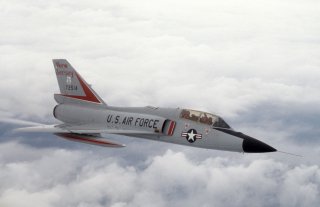 Here's What You Need To Remember: The F-106 Delta Dart proved to be the last dedicated Air Force interceptor, and the aircraft were gradually retired by the early 1980s. Some of those aircraft were converted into target drones and designated QF-106A, while six were retained by NASA for test purposes and used throughout the 1990s.

Throughout the Cold War, the United States Air Force continued to develop interceptor aircraft to address the threat from Soviet bombers. This included such aircraft as the Convair F-102 and the North American F-108, and finally, the Convair F-106 Delta Dart, which was designed to be the “Ultimate Interceptor.” But in the end, the F-106 actually proved that the need for such aircraft was simply overstated.

That is why the Delta Dart was the last dedicated interceptor in the U.S. Air Force to date.

The all-weather interceptor was developed as a variation on the F-102 Delta Dagger in the early 1950s, and it was originally designated as the F-102B as it retained the delta wing design. Due to extensive structural changes, including changes to the fuselage, and the inclusion of a more power Pratt & Whitney J-75 turbojet engine—which provided a maximum speed of 1,525 miles per hour and a cruising speed of 650 miles per hour—it was re-designated F-106 Delta Dart.

While it was the last dedicated interceptor, the aircraft was also among the earliest semi-autonomous military weapon platforms. The F-106 was fitted with a sophisticated Hughes MA-1 electronic and fire control system, which worked in conjunction with the SAGE (Semi-Automatic Ground Environment) defense system that took over control of the plane shortly after takeoff and guided it to the proper altitude and attack position. The system would enable the aircraft to lock and fire the weapons at an intruder aircraft and then return the plane to the vicinity of its airbase. The pilot would take over control for landing.

Armaments that were compatible with the aircraft included the Douglas AIR-2A Genie rocket with nuclear warhead, and the AIM-4 Falcon missiles, of which four could be carried.

The first F-106A flew in late December 1956, while deliveries to the Air Force began in 1959 but ended just over a year later. In total only 277 F-106As and 63 F-106Bs had been built. While it was considered for use in the Vietnam War, the F-106 Delta Dart remained stateside and was never used in combat.

One particular F-106 stood out after it earned the colorful nickname “Cornfield Bomber,” when it was involved in an incident during a training mission from Malmstrom Air Force Base in Montana in February 1970. The interceptor, which was in service with the 71st Fighter-Interceptor Squadron and piloted by Captain Gary Foust was on a routine flight when it suddenly entered an uncontrollable flat spin. Foust attempted unsuccessfully to regain control, and even deployed the aircraft’s drag chute as a last resort, but finally, Foust was forced to eject.

In a most unusual situation, the resulting change of balance actually caused by ejection somehow allowed the aircraft to stabilize. Miraculously, the unpiloted F-106 Delta Dart recovered and made a gentle belly landing in a snow-covered field near Big Sandy, Montana. After minor repairs, the aircraft was returned to service and later served with the 49th Fighter-Interceptor Squadron. The Cornfield Bomber was retired from service in 1986 and presented to the National Museum of the United States Air Force, where it is currently on display.

The F-106 Delta Dart proved to be the last dedicated Air Force interceptor, and the aircraft were gradually retired by the early 1980s. Some of those aircraft were converted into target drones and designated QF-106A, while six were retained by NASA for test purposes and used throughout the 1990s.

Peter Suciu is a Michigan-based writer who has contributed to more than four-dozen magazines, newspapers and websites. He is the author of several books on military headgear including A Gallery of Military Headdress, which is available on Amazon.com.  This article is being republished due to reader interest.