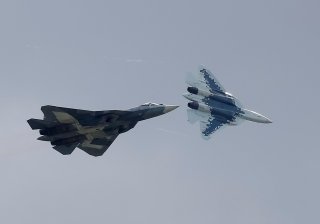 Key Point to Remember: The Indians’ complaints illustrated the yawning gulf between stealth-warplane design and the actual production of radar-evading jets. It’s one thing to sketch an advanced warplane on paper. It’s quite another to build one and get it to work.

Ten years after Russia’s Su-57 stealth fighter flew for the first time, plane-maker Sukhoi finally is gearing up to deliver the first of up to 76 of the fighters for front-line use.

The Su-57’s halting development could have turned out differently. As recently as early 2018, India was co-developing the stealth fighter with Russia, lending cash and commercial viability to the troubled design.

But New Delhi pulled out of the co-development deal in April 2018. According to Indian air force officials, the Su-57 was too expensive, poorly engineered and powered by old and unreliable engines.

The Indians’ complaints illustrated the yawning gulf between stealth-warplane design and the actual production of radar-evading jets. It’s one thing to sketch an advanced warplane on paper. It’s quite another to build one and get it to work.

All new aerospace development is difficult and many planes get poor reviews early in testing. But the gripes coming out of New Delhi were particularly worrisome for the Russians.

Sukhoi at the time was working on two variants of the Su-57—one for Russian use and another for the Indians. The Indian air force had ambitions to purchase 144 of the stealth jets, and the future revenue from this sale underpinned the entire Su-57 development effort. New Delhi was also kicking in $6 billion for design work.

According to transcripts of December and January 2014 meetings obtained by Business Standard, Indian air force and defense ministry officials listed at least four “shortfalls … in terms of performance and other technical features”:

The AL-41F engines fitted to the Su-57 were unreliable. The radar was inadequate. The airframe was poorly built, with serious implications for the jet’s stealth profile. And in light of these defects, $6 billion was too much to pay up front.

According to Business Standard, Russian officials countered, saying the AL-41F engines were a temporary fit until brand-new and more powerful motors could be developed. The radar, too, was temporary—pending new sensors being developed specifically for the Indian version of the warplane.

But the allegations of sloppy construction appeared to be particularly serious. Besides posing an accident risk, low-quality construction can result in gaps and mismatched angles that elevate a plane’s radar signature.

As early as 2013 it was apparent Sukhoi was having problems with quality control on the Su-57. At least one of the prototypes needed patches on its wings to keep from falling apart during high-stress maneuvers.

All the same, Business Standard speculated that the Indian complaints might have been somewhat politically motivated, as New Delhi also was planning to buy 126 new Rafale fighters from France for an eye-watering total price of $18 billion. Scrapping the Su-57 helped India pay for the French jets.

David Axe was defense editor of The National Interest. He is the author of the graphic novels War Fix, War Is Boring and Machete Squad. This article is being republished due to reader interest.