Why India Risked Everything to Build Nuclear Weapons 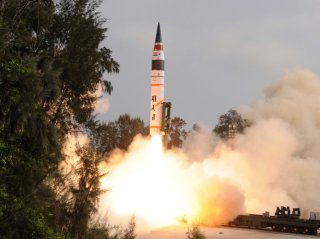 Here's What You Need to Know: India’s nuclear triad is a mix of capabilities—free-falling bombs, long-range and quite sophisticated missiles, and sub-launched missiles of unclear capabilities and likely limited range.

“An NFU policy essentially constitutes a promise, backed by a survivable nuclear arsenal, to only use nuclear weapons in response to a nuclear attack,” explained a Carnegie publication. “The logic is simple and effective: you don’t nuke me, and I won’t nuke you. India and China both have declared no-first-use policies, whereas Pakistan and the United States, among others, do not rule out the first use of nuclear weapons in a conflict.”

Despite India’s formidable nuclear arsenal, India had since 2003 maintained it will not use said weapons of mass destruction first, but strictly in a retaliatory manner for deterrence.

However, 2019, India called their no first use policy into question when Indian Defense Minister Rajnath Singh said that “Till today, our nuclear policy is ‘no first use’. What happens in future depends on the circumstances.” This curious statement is perhaps an example of deliberate strategic ambiguity.

Air delivery was India’s original nuclear delivery prong. Although speculative, it is believed that Indian SEPECAT Jaguars and Dassault Mirage 2000s are the primary (perhaps only) vehicles capable of delivering nuclear bombs from the air. It is also possible that Indian nuclear bombs are non-precision munitions that rely on impact to detonate.

In order to maintain a credible threat against China, India has pursued a strategy of improving their nuclear inter-continental ballistic missiles. This has been often done in tandem with Russia, despite the latter’s partnership with China in other defense-related areas.

The Agni missile family forms the backbone of the land-based nuclear triad. Although the Agni-IV and Agni-V are still in development, once deployed they would comfortably be able to strike Beijing, though the Agni-II and Agni-III are very likely already capable of doing so.

The jointly Russian-Indian developed BrahMos hypersonic missile may also otentially be able to carry nuclear payload in the future, although this remains unconcrete and speculative.

According to a quoted CIA report, “Russia has significantly supported in developing India’s nuclear programmes with technology and equipment, and become a main source of arms for the country,” especially regarding the sea-based part of the triad.

What India’s sea-based nuclear prong looks like is somewhat speculative as well, although the range of submarine-based missiles will likely be limited to below-1,000 kilometers, or approximately 620 miles.

Over all, India’s nuclear triad is a mix of capabilities—free-falling bombs, long-range and quite sophisticated missiles, and sub-launched missiles of unclear capabilities and likely limited range. Still, India is one of the preeminent nuclear powers in the region, behind China. Look to Russia for more developmental help in the future.