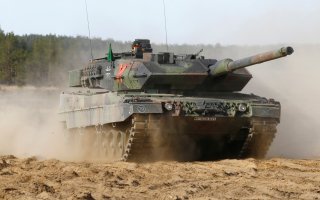 Here's What You Need to Know: London needs a new tank. It may be looking abroad for a solution.

More than 104 years after the British Army adopted the first tanks, which were deployed on the western front to smash through the German lines during the First World War, it now appears German tanks could be headed to the United Kingdom. Not as an invasion force but because the nation that pioneered the tank simply might have to adopt a foreign tank.

There aren’t really many alternatives—at least not cost-effective ones.

There is some irony that the British Army would adopt the German-built Leopard 2 main battle tank (MBT), which is considered among the best in the world, given that the first actual tank built by the British was dubbed “Little Willie” to mock Germany’s Kaiser Wilhem II. However, as close partners in the North Atlantic Treaty Organization (NATO), the British may have little other choice than to adopt the German-made tank.

David Axe, writing for Forbes in November 2020, laid out why such a move would make sense: “The British Army needs new main battle tanks—bad. Realistically, it has two options. Rebuild some of the roughly 220 aging, obsolete Challenger 2s. Or buy German.”

According to a new study for the Royal United Services Institute in London, it was determined it would be far cheaper in the life of the program for the British Army to procure the Leopard 2. However, the study did suggest that while it would be far riskier for the United Kingdom to develop a Challenger 3, it would also provide “valuable intellectual property.”

First in, First Out

The British military was the first to adopt the tank under a program which began as the Landships Committee under Winston Churchill, and this past summer it seemed that it could be among the first major power to ditch the tank—and the second NATO power following the Netherlands to retire its tank force.

The Challenger 2 has been in service for more than twenty years without a major upgrade, and the number in service has dwindled from more than 500 to just 227—and many of those are now in storage. That number could be further reduced to just 148 tanks, which would also reduce the British Army to two tank regiments—the Royal Lancers and the Royal Tank Regiment. Under this reorganization, each unit would have around fifty-six tanks while the remainder would be set aside for training and reserve use.

Adopting the German-built Leopard 2 could be the right move for the United Kingdom—as it could allow it to invest in other areas of defense. The United States’ M1A2 Abrams and Germany’s Leopard 2 are now used by more than a dozen NATO partners and these have the latest computers and networking systems. While adopting the Leopard 2 could come at a higher upfront cost, the Royal United Services Institute study noted that there is an existing market for spare parts, upgrades and a built-in support network. Any British Leopard 2s would be just a fraction of a global fleet, which would reduce the costs over the long haul.

If the British military were to adopt the Leopard 2, it wouldn’t be the first time it used a foreign-made tank. The British have a long history operating foreign-made equipment—it was the second largest user of American M4 Sherman during the Second World War (after the United States of course).

Moreover, despite being the pioneer of the tank a generation earlier, during World War II, the British largely struggled throughout the war to produce a tank capable of taking on German panzers. While its Centurion, which only entered service at the very end of WWII, was one of the best tanks in the early Cold War, it took great effort to produce the right tank. The United Kingdom simply doesn’t have the time to take a risky chance to develop a bad tank again. Not when a very good option is to simply buy a German import.