Will an Iranian Aircraft Carrier Soon Be Sailing in the Arabian Gulf? 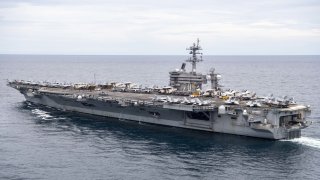 Here's What You Need to Remember: The vessel can reportedly carry out combat, logistical and intelligence-gathering missions and Tehran has said the warship can establish stable security in maritime transportation lines and provide assistance to the commercial and fishing fleets of the Islamic Republic.

Warships capable of carrying aircraft are used by navies around the world, but to date, the Iranian Navy isn't one of those countries that operate a carrier. The closest that the Islamic Republic of Iran has come to building an aircraft carrier is to "simulate" an American carrier as a weapons test platform. The "Elite" Revolutionary Guard Corps Navy (IRGC-N) had transformed an old target barge into a large-scale mock-up of that loosely resembled the U.S. Navy's Nimitz-class aircraft carriers.

It was used in the February 2015 "Great Prophet IX" exercises and again this past summer in similar exercises. Embarrassingly for the IRGC-N the faux carrier proved difficult to sink – that is until it floundered in waters in the channels near the Iranian naval base at Bandar Abbas.

Now, Tehran could be inching closer to developing a true carrier.

The Associated Press reported this month that the IRGC-N reportedly launched a heavy warship that was capable of carrying helicopters, drones and missile launchers. From the photographs that have been released online, it appears to be a large cargo vessel rather a true warship.

The vessel, which was named after the "martyred" Guard Naval Commander Abdollah Roudaki, was photographed carrying truck-launched surface-to-surface missiles and anti-aircraft missiles. It lacks anything resembling a flight deck and instead has a flat section mid-hull that has been designated as a landing pad for a helicopter. It looks less like a carrier than the First World War era warships that were converted into carriers.

According to IRGC-N claims, the Abdollah Roudaki is 150 meters or about 492 feet in length, and displaces some 400 tons – significantly smaller than the 332 meters (1,092 feet) length of an actual Nimitz-class aircraft carrier, and still roughly half the length of the America-class amphibious assault ships.

The vessel can reportedly carry out combat, logistical and intelligence-gathering missions and Tehran has said the warship can establish stable security in maritime transportation lines and provide assistance to the commercial and fishing fleets of the Islamic Republic.

"Today we are witnessing a combat and logistic support ship join the IRGC's Navy that can both defend itself, defend our interests at sea, and play a role in securing our country's maritime lines near and far," Maj.-Gen. Hossein Salami said during a ceremony earlier this month – as reported by ParsToday. "Some may have thought that the basis of our performance is close-range warfare, but we declare that both close-range combat in far-off areas and long-range combat are on our agenda."

Exactly what the purpose of this aircraft carrying vessel is has yet to be seen. One factor could be a matter of internal jurisdiction within the Islamic Republic. While the Iranian Navy patrols the waters of the Gulf of Oman and beyond, the IRGC-N's role has largely been to patrol the waters of the Persian Gulf.

Rear Adm. Alireza Tangsiri, commander of the IRGC's Navy, also suggested his force was ready for deep-water patrolling beyond the Persian Gulf. "Presence and assignments in the Indian Ocean is our right."

The Abdollah Roudaki could certainly provide the IRGC-N with true blue-water naval capabilities, but driving truck-launched surface-to-surface missile and anti-aircraft missile platforms onto the deck hardly seem to make for a capable warship.