Will the Next U.S.-Iran War Be Fought in the Strait of Hormuz? 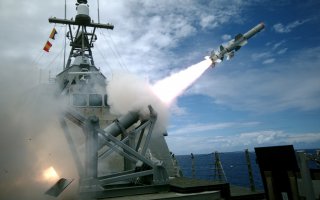 Here's What You Need to Remember: The narrow Strait of Hormuz is also well known as a high-tension flashpoint close to the Iranian border where large portions of the region’s commercial and military shipping traffic travel. The Strait of Hormuz is also known for being an area with a high risk for mines and even some kinds of land-fired ballistic missiles.

Swarms of Iranian small boats harassed and tried to intimidate a group of U.S. Navy ships as they transited the Strait of Hormuz on May 10, prompting the U.S. warships to repeatedly fire warning shots in an effort to diffuse the situation.

Several U.S. Navy Patrol boats, a Navy guided-missile cruiser and several U.S. Coast Guard ships were escorting a guided missile submarine, the USS Georgia, when they were approached at provocative high-speeds by Iranian Revolutionary Guard Corps Navy boats with, as a Navy report describes it, “their weapons uncovered and manned.”

The Iranian high-speed approaches, which closed within just 150 yards of the U.S. Coast Guard Cutter Maui traveling at speeds above 30 knots, were conducted by Iranian Fast In-Shore Attack Craft vessels.

While the Navy report referred to the Iranian actions as “unsafe and unprofessional,” reactions among service and Pentagon leaders may have been even more pronounced. Certainly, the kind of event is by no means new or unprecedented, as Iran has long been known to operate in this fashion, regularly stopping short of actually starting a lethal weapons engagement.

Apart from simply engaging in harassing or provocative behavior, there does not appear to be a sensible explanation for the Iranian small boat actions, unless, of course, the small boat swarming included some kind of serious attack contingency. The strategic aim of a small boat attack would of course be to simply overwhelm ship defenses and deck-mounted guns by approaching in close proximity in a dispersed fashion to “flood the zone” so to speak, and breach the protective perimeter or envelope surrounding a surface ship and it’s close-in weapons ranges with speed and volume.

Although unlikely to cause catastrophic structural damage to larger U.S. Navy ship with small arms fire or missiles, Iranian small boats packed with explosives for suicide bombing missions could present a very serious threat to a large surface ship, depending upon the size and scope of a blast radius. Destroying numerous small boats approaching simultaneously would, it seems, present a kind of ship defense predicament for certain ships such as Navy Cruisers or U.S. Coast Guard ships armed with medium-caliber deck-mounted guns.

However, alongside deck-mounted guns or other weapons, U.S. Navy warships could be armed with Close-in-Weapons-Systems (CIWS) phalanx guns able to fire hundreds of projectiles per minute to blanket areas with defensive fire. A deck-mounted Phalanx, such as the Navy’s current CIWS weapon, would fire hundreds of small steel penetrating projectile rods at approaching small boats, potentially disabling or even destroying them as they seek to approach. CIWS can also blanket a large area and, interestingly, the Navy began a massive fleet-wide upgrade of its CIWS weapons system years ago for the specific purpose of destroying small boat attacks. As far back as 2014, the U.S. Navy began implementing a CIWS 1B variant upgrade which greatly expanded the protective aperture beyond air defense to incorporate surface defenses as well, in part to specifically counter the kinds of small boat threats regularly presented by Iran.

Therefore, upgraded CIWS weapons can now destroy close-in threats that are on the surface and not just coming from the air, a protective technology of great relevance to these kinds of provocation. Should the small boats simply be too fast and too numerous for deck mounted guns or larger munitions to intercept, then a surface-firing CIWS weapon could prevent an attacking small boat from being able to closely approach or penetrate the ship’s hull.

However, the group of Navy ships only included one navy cruiser along with several U.S. Navy and U.S. Coast Guard Patrol Boats, according to the Navy report. While some Coast Guard Cutters do have CIWS, most of the smaller Navy and Coast Guard patrol ships do not.  Therefore, perhaps the Iranian small boats were extra provocative, at least in part, because they knew they might not have to face CIWS should they approach closer in. Regardless, for a host of obvious reasons, there is little rationale or basis upon which it might appear to make any sense for the Iranian fast-attack craft to engage U.S. Navy warships in any kind of serious exchange of fire.

Kris Osborn is the defense editor for the National Interest. Osborn previously served at the Pentagon as a Highly Qualified Expert with the Office of the Assistant Secretary of the Army—Acquisition, Logistics & Technology. Osborn has also worked as an anchor and on-air military specialist at national TV networks. He has appeared as a guest military expert on Fox News, MSNBC, The Military Channel, and The History Channel. He also has a master’s degree in Comparative Literature from Columbia University. This article first appeared earlier this year.