Within 5 Years, China's Destroyer Fleet Will Double To 40 Warships 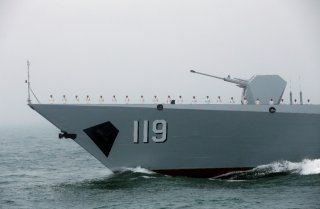 Here's What You Need To Remember: The ship has a blended body-bow, smooth exterior, absence of large protruding deck masts and few external deck-mounted weapons. In some respects, the ship does appear to resemble some elements of the U.S. Navy’s stealthy USS Zumwalt destroyer.