Y-20: The Plane From China the U.S. Military Truly Fears 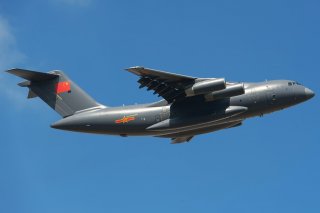 Here's What You Need to Remember: A multifunctional Y-20 would make a large difference regarding amphibious attacks. Not only could the large cargo aircraft deliver supplies, ground troops or weapons to an amphibious landing area should a beachhead be secured, but it could enable fighter aircraft to help an amphibious attack pursue air superiority.

China has a group of honor guard members to Moscow as part of a deliberate show of support by attending Russia’s seventy-fifth World War II Soviet Victory Parade, a move signaling ongoing collaboration or even partnership between the two countries. At the same time, the Chinese move appears to be a clear effort to demonstrate the range and scope of its Y-20 cargo plane which, Chinese media reports, will soon be developed into a tanker refueling aircraft variant.

A report in The Global Times says a large Chinese Y-20 transport plane transported more than one hundred Chinese soldiers in an effort to “demonstrate the aircraft’s technical capability . . . and display the high-level military cooperation between China and Russia.”

At the invitation of the Russians, the Chinese honor guard will attend the Russian Victory Day parade at Moscow’s Red Square on June 24.

Chinese analysts were also quoted in the report talking specifically about the expanding role for its Y-20 aircraft, some of which will likely be converted into tankers. Also, the Chinese could build new, tanker-variant Y-20s. Such a development would bring significant tactical advantages, as it could more than double the attack radius of its many fighters, including the emerging J-20 and J-31 fifty-generation aircraft. While many of China’s fighters are within range of attacking Taiwan on a single sortie, expanded combat radius would enable much longer “dwell time” for fighter planes searching for targets in the skies above Taiwan. Furthermore, greater power projection would expand the reach of its growing fleet of aircraft carriers, bringing increased ability to hold areas at risk from farther ranges.

Additionally, perhaps of equal or even greater significance, expanded aerial combat reach could make it much easier for China to attack, surveil or simply patrol expansive areas of the South China Sea on single missions, or spend much more time traveling between locations to scout targets or demonstrate territorial claims. Technically speaking, while the U.S. Air Force’s KC-46 tanker is certainly different than its C-130s, it would not be that difficult to convert a large Y-20 into a tanker configuration.

A multifunctional Y-20 would make a large difference regarding amphibious attacks. Not only could the large cargo aircraft deliver supplies, ground troops or weapons to an amphibious landing area should a beachhead be secured, but it could enable fighter aircraft to help an amphibious attack pursue air superiority. China is quickly expanding its amphibious assault capacity with new ships and drones, therefore having additional, sustained fifth-generation airpower in support of amphibious assaults could bring an entirely new dimension to Chinese threats to Taiwan and other areas. This raises the key question also as to whether the J-31, should it be launched from carriers, might be able to challenge the U.S. F-35B fighter jet.