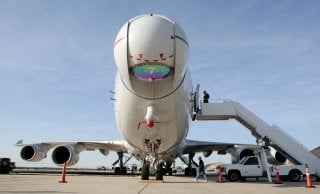 Sébastien Roblin holds a master’s degree in conflict resolution from Georgetown University and served as a university instructor for the Peace Corps in China. He has also worked in education, editing, and refugee resettlement in France and the United States. He currently writes on security and military history for War Is Boring. This piece was first featured in September 2019 and is being republished due to reader's interest.

Image: The U.S.A.F. Airborne Laser aircraft sits on the tarmac at Andrews Air Force Base outside Washington, June 21, 2007. The modified 747 aircraft uses a high-energy Chemical Oxygen Iodine Laser to generate an energy beam from the aircraft's nose to intercept and destroy a hostile ballistic missile during the boost phase of its trajectory. REUTERS/Larry Downing (UNITED STATES)