All U.S. Troops in Afghanistan Should Come Home by Christmas 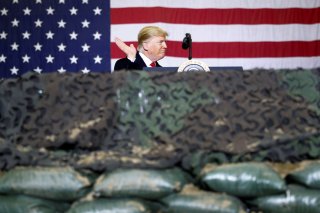 The last American troops fighting in Afghanistan should be “home by Christmas,” President Donald Trump tweeted in October.

Though withdrawing U.S. troops before Christmas would be welcome, Trump’s announcement was widely met with justified skepticism. For one thing, National Security Adviser Robert O’Brien earlier that day said the deployment—currently numbering around eighty-six hundred—would only be reduced to twenty-five hundred, and that only after the holidays. For another, as is so often the case with Trump’s tweets, it was unclear whether his statement should be interpreted as an aspiration, campaign pledge, or true policy directive.

Joint Chiefs of Staff Chairman Army Gen. Mark Milley dismissed the latter interpretation in an interview, branding any drawdown timeline past the end of November as mere “speculation.” “We're on a plan to do a responsible, deliberate drawdown to about 4,500 [by late November], and then future drawdowns will be determined by the president,” Milley told NPR. “All of the drawdown plans are conditions-based,” he continued, “to end [the] war responsibly, deliberately, and to do it on terms that guarantee the safety of the U.S. vital national security interests that are at stake in Afghanistan.”

Milley’s comments were informed and undoubtedly a more accurate preview of U.S. troop levels in Afghanistan over the next three months than was the president’s tweet. But his remarks also highlight three serious problems in U.S. foreign policy, problems which materially contribute to the fact that Afghanistan—long since unpopular at home and stalemated in the battlefield—is the longest war in our nation’s history and yet has no end in sight.

The first problem is the apparent total disconnect between the president’s promises to the American people and the policy pursued under his administration. Like Presidents Barack Obama and George W. Bush before him, Trump campaigned in 2016 (and is now campaigning in 2020) on turning the United States away from misguided military interventions past. He decries “endless wars” and called invading Afghanistan a “terrible mistake.” This is not even the first time he’s talked about major drawdowns that did not come to pass; in August of 2019 and again in May of 2020 he reportedly wanted a full withdrawal by Election Day, and at the end of 2018 the troop count was supposedly going to drop to seven thousand. It did not.

This resultant situation is bizarre. As president, Trump has the constitutional authority to end the war. He is publicly promising (wishing for? imagining?) exactly that, but he seems unwilling or unable to bring his own professed plan to fruition. A different president might be more capable here, but the underlying inertia of Washington’s foreign policy establishment—prevailing across three consecutive presidencies from both major parties—would be the same. It should not be this difficult for citizens of a country with an ostensibly representative government to exit wars we no longer wish to fight.

The second problem is this notion of conditions-based withdrawal. It sounds very sensible on paper, but in practice conditions-based withdrawal plans so far mean withdrawal deferred forever. The conditions in Afghanistan always seem to require we stay another year—or ten. If conditions are deteriorating, it would be irresponsible to leave. If conditions are improving, then we must press on to victory. The result is perpetual war, Harvard international relations scholar Stephen M. Walt wrote in 2017, as “[w]hat began in 2001 as a focused effort to topple the Taliban and rout al Qaeda has become an endless, costly, and unrealistic effort with no clearly discernible endpoint and little hope of success.”

The third problem in Milley’s response is the assumption that there are “U.S. vital national security interests that are at stake in Afghanistan,” which our military presence protects. This is false. We could, as Trump tweeted, withdraw all U.S. troops by Christmas without endangering vital American interests because there are no vital American interests at stake in Afghanistan. (On the contrary, withdrawal would serve our interests well.) Preventing terrorist attacks on the United States does not require permanent U.S. occupation of a nation half the world away; terrorists, in fact, can plot from anywhere. Moreover, after two decades of war, it is eminently obvious our military intervention is not achieving any of its stated goals. Even if we did have inextricable interests in Afghanistan, there is simply no case to be made that this generational warfare is an effective way to protect them.

The war in Afghanistan is stagnant, unjust, and demonstrably for naught. It is morally and pragmatically indefensible to further prolong it and continue sending U.S. troops into harm’s way for nothing. Withdrawal by Christmas is unlikely—and the tweet probably no more than politicking—but it is a good idea and far more responsible than the measured rubbish Milley offered instead.