Deterrence, Not Domination: How to Deal with a Rising China 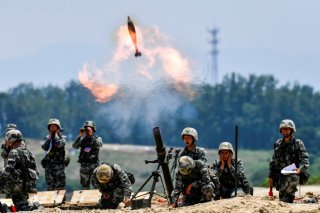 Many American leaders have expressed concern over great power competition between the United States and China, often alluding to—if not downright calling for—a military confrontation. However, the United States should focus on deterring, not dominating, China militarily, while pursuing social and economic competition with the goal of China participating in, not undermining, the international system.

China offers the world a highly authoritarian system that brooks no dissent and uses advanced technology to monitor the thoughts and actions of its people. Chinese citizens are free to make money but barred from expressing dissent or listening to media accounts that their leaders object to. The booming Chinese economy has lifted millions of people out of poverty but has been aided by substantial intellectual property theft from other countries and businesses.

General Secretary Xi Jinping’s government is slowly eliminating all vestiges of democracy in Hong Kong. The Xinjiang internment camps have been widely decried as part of a systematic genocide. China has ignored international rulings on control of the seas to assert control of international waters and the resources they contain.

All this criticism, to be sure, is not to say that the United States is without problems of its own. But almost no matter where you stand on the American political spectrum, the challenge China poses to U.S. national interests is very real.

The question remains, how do we deal with it? The political Right’s answer to this challenge is, as usual, to threaten confrontation and throw more money at the Pentagon.

Republican leader Mitch McConnell (R-KY) has prodded President Joe Biden to spend more to counter China, warning him not to cut or freeze the military budget. Thomas Spoehr, a retired Army lieutenant general and director of the Heritage Foundation’s Center for National Defense, has written: “Biden Must Boost 2022 Budget To Counter China.”

Sen. Tom Cotton (R-AR), always eager to race to the right, ominously set a goal to destroy the Chinese, saying, “We need to beat this evil empire and consign the Chinese Communists… to the ash heap of history.”

Surprisingly, the Biden administration has not been immune to the China paranoia.

During his confirmation hearing, Defense Secretary Lloyd Austin III made it crystal clear when he said, “China … presents the most significant threat going forward because China is ascending.” Secretary Austin added that Beijing is the top “pacing threat” for the military. Now, the Pentagon is promoting a $4.7 billion funding request to build up the U.S. military in the Indo-Pacific region.

But there are some important distinctions between the Biden policy and a purely military response. Deputy Defense Secretary Kathleen H. Hicks added some nuance to Austin’s position. She told the Aspen Forum, “Beijing has the economic, military and technological capability to challenge the international system and America’s interests within it.”  But then Hicks urged open channels of communications and diplomacy with China. She added, “We anticipate the U.S. military will often serve as a supporting player to diplomatic, economic and other tools.” That is, clearly, quite different than “consigning China to the ash heap of history.”

And, indeed, there are many promising areas of potential U.S.-Chinese cooperation including trade—where China remains our largest trading partner—climate change, student exchanges, and a nuclear agreement with Iran.

Building more nuclear weapons and beefing up American forces in Asia is not the answer. Certainly, the United States should maintain a strong deterrent force against Chinese adventurism in Taiwan and the South China Sea. But a military confrontation between these two superpowers is dangerous to both countries and the world, and could lead to nuclear war.

China will always seek to be militarily predominant closer to its shores. That’s just the reality of geography. A huge military buildup in the region to win an unwinnable war that would devastate the global economy will not work. It would be better to maintain sufficient forces to deter Chinese military adventurism, while relying on a strong economy, infrastructure, and foreign policy to support allies in the region and stabilize our relationship with China in a mutually beneficial way.

House Armed Services Committee Chairman Adam Smith argues that rather than dominate China, the United States should look for ways to change its calculus so that China realizes that conflict is not in its interest. “Deterrence, not dominance, is what I’m really kind of looking at us being able to do here,” he said.

Coming from the highest echelons of the corporate world, Jamie Dimon, the CEO and chairman of JP Morgan Chase, spoke not of Chinese military advances but instead American political and economic weaknesses. “The Chinese see an America that is losing ground in technology, infrastructure and education—a nation torn and crippled by politics, as well as racial and income inequality—and a country unable to coordinate government policies (fiscal, monetary, industrial, regulatory) in any coherent way to accomplish national goals. Unfortunately, recently, there is a lot of truth to this.”

CIA Director William Burns, at a congressional discussion of global threats, similarly warned not of Chinese military enhancements but their economic progress. He noted that “competition and technology is right at the core of our rivalry with an increasingly adversarial Chinese Communist Party and Chinese leadership in the coming years.”

The solution? Remember that military force is not the only foreign policy tool in the toolbox. There are other options: Educating our work force, improving U.S. infrastructure—especially our ports, roads, and telecommunications—attracting the world’s brightest minds, protecting intellectual property and global trade rules, and steadily increasing government-funded research so U.S. entrepreneurs can turn the most promising new ideas into start-ups.

Council on Foreign Relations president Richard Haass made it clear what he believes is the best response to China: “We have to put our own house in order. In some ways, the most effective tool vis-à-vis China might not be how many warships we have in the South China Sea; it might be whether the United States is politically united and whether we are economically competitive.”

We should welcome the competition of ideas and economic progress while working to avoid the pull of military competition or a new Cold War. Even while maintaining an appropriate military presence in the Asia-Pacific region, we should reject the idea that war with China is likely, or winnable. We should take up the values and ideas of the American democracy and economy to improve our own nation, diminish our own inequalities, and demonstrate that democracy, not autocracy, is the wave of the future.

John Isaacs is Senior Fellow at the Center for Arms Control and Non-Proliferation.