The Humanitarian Impact of the War in Ukraine 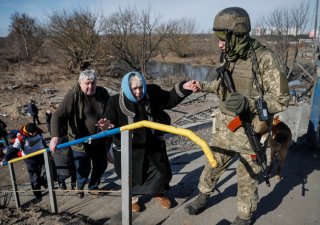 As of this week, over three million people have fled Ukraine since Russia’s invasion began on February 24, leading to the largest refugee crisis in Europe since WWII. Those that have remained in Ukraine risk their lives under Russian airstrikes and attacks that are indiscriminately targeting civilian homes and infrastructure.

Negar Tayyar joined Ploughshares Fund’s podcast, Press the Button, to discuss the humanitarian impacts of the war in Ukraine with co-host Michelle Dover. Tayyar is the co-founder and director of Global Whole Being Fund, a global grantmaking body dedicated to supporting people on the move. Her expertise and personal experience helped put this refugee crisis in context and drove home how this moment can be seized as a turning point for global refugee response efforts.

The speed at which this crisis has escalated is astonishing, as is the rapid refugee flow. Many who have not fled across the borders have fled their homes and are sheltering in train stations, basements, or with family in different regions. But this refugee crisis looks different than those witnessed over the past decade. For starters, Tayyar explains, the humanitarian and refugee aid being provided to Ukrainians is extraordinary.

Thus far, there has been immense support from Europe and the United States for the people of Ukraine. “Poland has been taking the biggest toll in terms of receiving people,” Tayyar says, with an estimated 1.8 million Ukrainian refugees now in Poland. While this is the correct response and is applauded by the humanitarian aid community, it is also challenging to watch Poland take in so many Ukrainian refugees as those fleeing other conflicts wait on the border. Tayyar draws attention to the Syrian refugees waiting on the border of Belarus and Poland to enter the European Union. These refugees have been suffering in freezing temperatures and snow. Watching this, Tayyar says, “we have mixed feelings … many of us have been criticizing how there are still structural racism and discrimination.” She adds that “the bottom line was these … people were seeking protection at the same borders, at the same country, and those [who] were denied access are still being denied access.” The contrast in how these refugee populations are treated is stark.

Why the difference? Tayyar points out that in Europe, there is a “visceral feeling of being affected” by the conflict in Ukraine, “and that fear is something that we haven’t seen to [this] degree on the European continent” in decades. For her, this reaction from Europe and the United States is not altogether surprising. Drawing on her experience in the humanitarian aid space, Tayyar explains that it is well known that “systemic discrimination and racism [are] prevailing and that people are being treated differently because of their race, gender, ethnicity, religion.” Tayyar hopes that the Ukraine crisis can rewrite the story for refugees from other conflict-torn regions.

Tayyar says that the EU’s acceptance of Ukrainian refugees may have done the humanitarian space a favor. By bringing a level of humanization to the Ukrainian refugee crisis, demonstrating acts of kindness, and treating refugees with the dignity they deserve, the pictures coming out of Ukraine change the typical refugee narrative. Tayyar believes that she and her colleagues can be “energized around this because we see that another way of dealing with people who are forced to flee their homes is possible, it’s doable, it’s viable. And it’s the right thing to do.” Her work moving forward is “to use how Europe is responding now as a model for how we need to respond to people, period.”

This issue is not unique to the European border. Tayyar adds that America’s approach toward refugees also suffers from similar systemic discriminatory policies. While the United States has granted temporary protection for Ukrainians, it is still pushing back refugees on the U.S.–Mexico border. In Afghanistan, the U.S. withdrawal and the Taliban takeover also led to a massive unaddressed refugee crisis, including a large-scale famine within the country. This is not an issue unique to conflict; Tayyar highlights that climate-driven displacement outpaces conflict-driven displacement.

Luckily, there are groups like Tayyar’s working together as a part of the Choose Love Campaign. While 99 percent of the funding for this cause goes to international organizations, Tayyar is humbled by the response from concerned citizens around the world. And, she concludes, supporting these smaller actors is vital—it is through their work that much of the understanding of the local context and due diligence efforts take place, both of which are keys to a successful response in the long term.

The entire episode with Negar Tayyar is available here. You can find out more about the Global Whole Being Fund on their website.