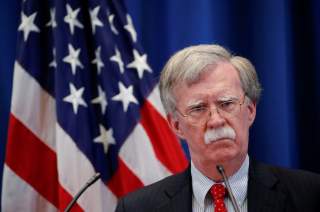 National Security Adviser John Bolton wants you to know there’s a new sheriff in town. Iran is the globe’s leading state sponsor of terror, and will be treated accordingly. Under Bolton, the United States has swiftly reversed course from treating Tehran as a potential pivot partner in the Middle East.

Instead, the United States intends to bolster its support for the Sunni Gulf allies and open up a more expansive effort against Islamic extremism, including Shia-supported radicalism.

That, at least, was the fiery message delivered by Bolton to reporters on Thursday. The press call, unveiling the National Security Council’s new counterterrorism strategy focused almost entirely on Iranian activities, and not on the Sunni groups Al Qaeda and Islamic State that are responsible for much of the violence perpetrated against Americans in recent decades.

“The global threat posed by terrorist groups is more complex than ever,” Bolton told reporters.

Bolton argued: “Iran-sponsored terrorist groups such as Lebanese Hezbollah, Hamas and Palestinian jihad continue to pose a threat to the United States and our interests. . . . This is not the Obama administration, would be my message to Iran and anybody else.”

Bolton’s unveiling of an Iran-centric counterterrorism strategy follows his announcement earlier this week of U.S. secession from the 1955 Treaty of Amity with Iran.

Secretary of State Mike Pompeo piled on. This week, he called U.S. policy prior to leaving the treaty an “absolute absurdity.”

For some, the administration’s continued, laser focus on Iran is perplexing, even distressing.

“Essentially, the administration is attempting to confront Iran everywhere,” Retired Lt. Col. Daniel L. Davis of Defense Priorities told me Friday. “Iran is a menace, but they are contained by the other powers in the Middle East. This action seems to go against the administration’s stated desire to let others do more for their own security. . . . Israel and Saudi Arabia are more than capable of doing that in ways that don't risk war for the U.S.”

But Bolton seems to view such sentiments as the height of naivete.

“There is a terrorist ideology that we’re confronting. I think it’s long been the president’s view that without recognizing that we’re in an ideological struggle, that we can’t properly address the terrorist threat,” Bolton told reporters Thursday. “The notion that just some day the war against terrorism will be over. Sure. As John Maynard Keynes said, ‘In the long run we’ll all be dead.’”

The push from Bolton is a part of a broader, renewed effort against certain Islamist contingents that precedes his tenure in this White House. An emboldened Gulf Cooperation Council, led by Saudi Arabia and the United Arab Emirates, have sought—with American backing—to squeeze Qatar and Turkey for their support of the Muslim Brotherhood. This effort has earned fresh attention this week with the disappearance of Saudi columnist Jamal Khashoggi. Khashoggi was last seen at a Saudi consulate in Turkey earlier this week.

There is an architecture of outside support around the Bolton and the president that supports this White House’s forceful stance in the Middle East.

In a conversation with me earlier this year, Alireza Jafarzadeh of the National Council of Resistance of Iran (NCRI), affiliated with the MEK, likened Tehran to Moscow in the Cold War—a putative center of subversion. For years, John Bolton attended NCRI events and other functions of Iranian dissident groups before returning to government this past spring. His picture is on the wall of NCRI offices in Washington, along with other supportive U.S. politicians. Rudy Giuliani, also a supporter of this outfit, told me last month in New York that the administration basically already has a regime-change policy on Tehran.

Another Iran hawk, Frank Gaffney, stated on Friday: “President Trump unveiled a new counterterrorism strategy yesterday that promises to fight the ‘radical Islamic terrorists’ and the ‘ideology’ they call Sharia. Help, it appears, is on the way.” The question is whether Trump really intends to deliver it or will ultimately resist the counsel of his own advisers.