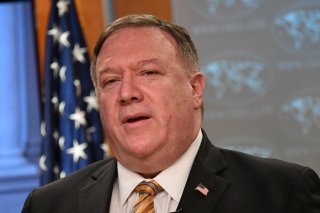 Iranian authorities asked INTERPOL to issue an arrest warrant for U.S. President Donald Trump, a few days after the Trump administration asked the United Nations Security Council to extend its sanctions on Iran.

The diplomatic spat turns international institutions into a political battleground, pitting Russia and China as well as Iran against the United States. And it puts European nations in an awkward position as they try to preserve international agreements, including the 2015 nuclear deal with Iran.

“We foresee another failure for the U.S. in this arena,” Iranian foreign ministry spokesperson Abbas Mousavi told reporters on Monday. “We advise them not to test what they have tested before and not to pave a way which leads to a deadend.”

U.S. Amb. Kelly Craft and Special Representative Brian Hook had presented a resolution to the Security Council last Wednesday asking the body to extend its arms embargo on Iran. Hook is currently in the Middle East to discuss the embargo, and met with senior officials in the United Arab Emirates on Sunday.

The embargo was set to expire in October 2020 under the nuclear deal with Iran, which puts restrictions on the Iranian nuclear program in exchange for economic relief.

The Trump administration left the deal in 2018, prompting Iran to resume its sensitive nuclear activities. The United States is now reserving the right to activate the “snapback” mechanism, which would restore UN sanctions on Iran, including the arms embargo.

Russia and China have rejected any U.S. right to activate snapback. European members of the Security Council were more cautious, warning that it would be a bad idea without saying whether the United States has the right to do it.

“We firmly believe that any unilateral attempt to trigger U.N. sanctions snapback would have serious adverse consequences in the U.N. Security Council,” Britain, France, and Germany declared in a June 19 joint statement. “We would not support such a decision, which would be incompatible with our current efforts to preserve the [nuclear deal].”

Hook countered in a conference call that “nobody can argue that Iran’s behaviour since 2015 merits a lifting of the arms embargo.”

Iran has also gone on the diplomatic offensive, asking INTERPOL on Monday to issue a “Red Notice” for several U.S. officials, including Trump. The international law enforcement agency rejected Iran’s request for an arrest warrant, stating that it cannot “undertake any intervention or activities of a political, military, religious or racial character.”

Iranian authorities accuse Trump of orchestrating the assassination of Maj. Gen Qassim Suleimani, an Iranian special forces commander who was killed by a U.S. drone in January.

U.S. officials originally claimed that the killing was necessary to stop Suleimani from carrying out an “imminent” attack, but later told Congress that it was a move to deal with Iran’s broader “strategic escalation” in Iraq.

The Trump administration had designated Suleimani’s branch of the Iranian military, the Islamic Revolutionary Guard Corps, a terrorist group in April 2019.

Hook mocked the Iranian request for an arrest warrant at a joint press conference with Saudi foreign minister Adel al-Jubeir.

“This has nothing to do with national security, international peace, or promoting stability, so we see it for what it is,” Hook said. “It's a propaganda stunt that no one takes seriously, and makes the Iranians look foolish.”