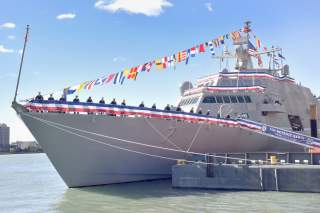 Protests were inevitable when the Office of Management and Budget released a memo with plans to cut future orders for twelve new warships and early retire a dozen more vessels currently serving in the U.S. Navy. Asked to plan for a budgetarily impossible 355-ship Navy, the OMB proposed budget actually would see ship counts decrease from 290 to 287.

The proposal seemingly reflects skepticism that the Navy’s current warships are capable of meeting near-future challenges, trading away a significant amount of firepower in the near term in exchange for a smaller number of more modern vessels tomorrow, even though those successors remain strictly on the drawing board.

A key bit of underlying context is that the Navy’s two major new surface warfare programs at the turn of the twenty-first century, the Zumwalt-class stealth destroyers and the littoral combat ship, have been expensive disasters. That leaves the Navy planning to retire vessels without a new design ready to take their place.

Let’s take a look at the ships on the budgetary chopping block.

The Navy’s Independence and Freedom-class littoral combat ships were in theory meant to be cheap, cost-efficient corvette-size vessels with modular mission packages ideal for coastal operations. But the program ended up being under-gunned, breakdown prone, and neither cheap nor modular.

The Navy is therefore proposing to early retire the first two vessels of each class in 2021—even though these ships had eight to fourteen years of service life remaining!

Admittedly, these early vessels were essentially test beds, and were to be relegated to testing and training roles. Nonetheless, their proposed retirement of these vessels after only eight to fourteen years in service shows just how disenchanted the Navy has become with them.

However, even orders for the ship destined to succeed the LCS, a more heavily armed frigate-class vessel provisionally dubbed the FFG(X), have been reduced from twenty to nineteen, even though the Navy is nowhere near deciding what design it will procure.

Currently four ships are under consideration: Austal USA offering an expanded version of the Independence-class LCS; General Dynamics has a proposed spinoff of the F100 frigates used by Spain; Italian shipbuilder Fincantieri is proffering a variant of the FREMM frigate used by France and Italy; and Virginia’s Huntington-Ingalls is proposing an up-gunned evolution of the U.S. Coast Guard National Security Cutter. A contract for the vessels with a projected unit cost of $955 million should be awarded in 2020.

LPDs are massive floating military bases designed to carry between 600 to 800 troops each, as well as two air-cushion landing craft that can land them ashore, and up to four helicopters on their decks.

The Marine Corps, however, has grown skeptical that traditional amphibious landing tactics revolving around LPDs are becoming less and less viable due to new long-range anti-ship missiles. This may be encouraging the Navy to retire three of its LPDs early between 2021 and 2025.

The Navy has plans to replace its diverse fleet of auxiliary warships with a common-hull design (possibly based on the portly San Antonio-class LPD) known as CHAMPs, with different ships tailored to serve submarine tenders, hospital ships, and cargo haulers.

But per ship costs of CHAMPS were deemed excessively high, and the proposed budget eliminates all seven CHAMPS vessels due for procurement. That means the Navy may be forced to devise an alternative.

Displacing nearly 10,000 tons and packing a ridiculous 122 missile-launching cells, the U.S. Navy’s Ticonderoga-class missile cruisers are amongst the largest surface combatants in service today. From the onset, the Ticonderoga-class cruiser was built around the networked area-defense capability of its Aegis combat system and its SPY-1 radar. That capability was expanded to include large-area ballistic missile defense using the powerful SM-3 missiles.

However, the Navy sees the large, aging warships as overly expensive to operate and too appealing a target (ie, too many eggs in one basket) for enemy attacks as its transitions to a doctrine of ‘distributed firepower.’ The cruisers’ aging systems also impose very high maintenance burdens.

The new budget therefore proposes to increase the number of Ticonderogas retired by 2025 from nine to thirteen, despite the cruisers having three to seven years of their planned service lives remaining.

The latest Arleigh Burke-class destroyers, also equipped with the Aegis combat-system, are nearly as big and heavily armed as the Ticonderogas, despite being designated a destroyer instead of a cruiser. The Flight III models cost $1.82 billion each, displace 10,752 tons, and comes packed with 90 missile-launching cells, as well as anti-submarine torpedoes and a fancy new SPY-6 radar. The latest Arleigh Burkes are also equipped for ballistic missile defense.

Therefore, it comes as a surprise that the Navy wants to trim away five of the twelve-new Arleigh-Burke class destroyers slated for procurement.

What would take their place? Five newer model missile destroyers dubbed the “Large Surface Combatant.” But there’s a catch: the LSC is no where near being selected or defined.

The proposed budget also surprisingly reduces the order for Virginia-class submarines by one hull. The Navy’s current workhorse attack submarine is believed to be amongst the quietest on the planet, and several have been upgraded with the Virginia Payload Module, giving them land-attack capability.

Though the reduction of one hull isn’t big, it’s still surprising given that submarines warfare is seeing a renaissance in the Asian-Pacific, as China and its regional competitors churn out new submarines in unprecedent numbers.

Like the cut to the destroyers, then, the reduction in the Virginia-class buy appears linked to the Navy’s ambitions to begin procuring a next-generation successor dubbed the SSN(X) or Improved Virginia—first procurement of which has already been pushed back to around 2033 and service entry expected in 2044.

So what’s behind all these cuts and the decline in ship count? In short, it may reflect a negotiating tactic intended to shake more dollars out of the Congressional money tree. And furthermore, it reflects the Navy’s interest in investing in a ‘Ghost Fleet” of large drone ships which currently don’t count as contributing to ship count—a project discussed in more detail in a companion article.

At the end of the day, it remains a steep challenge to maintain hundreds of warships on constant deployment around the globe and simultaneously deploy revolutionary new designs oriented around new technologies and doctrines. The OMB memo ends up prioritizing investment in next-generation systems at the expense of those currently on order or in service that could be used for many more years.