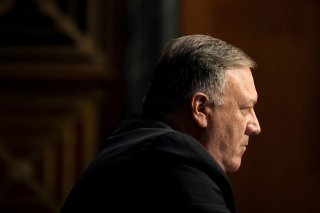 Duolingo has been banned from providing certain language-learning services to Syrians under U.S. economic sanctions on Syria, the online language learning service confirmed.

The United States has imposed harsh economic sanctions on Syria meant to punish the ruling Assad family for human rights abuses. But sanctions have also been criticized for harming Syrians outside the regime.

The sanctions have even blocked Duolingo from providing language evaluations to Syrians, a message to Syrian users widely shared on Twitter last week showed.

“As a U.S. company, Duolingo is required to comply with U.S. sanctions, including those that restrict transactions or dealings with Syria. As a result, we are unable to offer the Duolingo English Test in Syria,” company spokesperson Sam Dalsimer wrote in an email to the National Interest. “We are working directly with the U.S. government to seek authorization so that we may begin offering the test in Syria.”

“We want nothing more than to ensure that our product is accessible around the world to everyone who needs it, and hope to be able to make that happen soon,” Dalsimer added.

There are several layers of U.S. sanctions on Syria, ranging from terrorism-related sanctions imposed in the 1970s to the Caesar Civilian Protection Act passed last year.

Obama’s order bans “the exportation, reexportation, sale, or supply, directly or indirectly, from the United States, or by a United States person, wherever located, of any services to Syria.”

This would include Duolingo’s online English proficiency test, which costs about $49 and is accepted by thousands of universities, including Yale, Columbia, and Johns Hopkins.

“‘Internet freedom’ has long been a cornerstone of the State Department’s policy,” she wrote in a text message, “but the actual effort to work with the companies has proven lackadaisical on the part of the U.S. Treasury and State Department, and civil society efforts have reached roadblocks by legal departments of these tech companies time and time and again for years.”

“There is a dissonance between what the sanctions are supposed to do and what they are doing,” Alimardani added.

U.S. officials insist that the sanctions on Syria do not harm civilians.

But a Syrian learning English is “not going to have much luck” if their language studies are not part of a humanitarian relief program, explained Aron Lund, a fellow with The Century Foundation.

That would block an ordinary citizen trying to pay out of pocket for an English test, whether they live under the control of the regime or myriad Syrian rebel groups.

“If [Duolingo] were to make a misstep on these issues, they could be dragged into court by the U.S. government and ordered to pay very serious fines,” he explained.

Duolingo’s sanctions are only a small part of how sanctions have affected Syria’s postwar recovery.-

The country is facing a major economic crisis even as fighting cools down and Bashar al-Assad cements his control over the country. Unemployment has jumped to 50%, and food prices have more than tripled since June 2019, according to the United Nations.

“Assad’s regime likes to pretend that sanctions are the only reason the economy has tanked, which is false,” Lund concluded. “The United States and the European Union like to pretend that the mass impoverishment of Syrians has nothing to do with the sanctions, and that’s also false.”