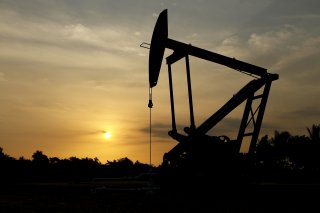 Sen. Pat Toomey (R–Pa.) called a recent Iranian oil shipment to Venezuela “pathetic,” as the Trump administration raised the alarm over the alleged sanctions-busting trade between the two U.S. adversaries.

Iranian oil tankers have begun to arrive in Venezuela despite warnings and threats from the Trump administration. The administration has attempted to link both countries to the looming great power competition with China and Russia through an international axis of authoritarianism.

But members of Congress are increasingly skeptical of the threat posed by regional adversaries like Venezuela and Iran—and some have even portrayed these regional conflicts as a distraction from the global U.S.-China struggle.

Toomey called the trade “a pathetic very, very small scale step that these two rogue countries are going to engage in” during a Tuesday conference call with reporters.

“That doesn’t change the fundamental dynamics of either of them,” he claimed. “They’re both economic basket cases. Regardless of how much oil Iran manages to deliver to Venezuela, both economies will remain basket cases for a variety of reasons.”

Sen. Chris Van Hollen (D–Md.) said that he had agreed and had “nothing to add.”

Van Hollen and Toomey were discussing their proposal to impose economic sanctions on China over human rights abuses in Hong Kong.

“The extent to which the Chinese economy is dependent on, integrated with U.S. dollar transactions and the American economy is pretty hard to overstate,” Toomey said. “So I think these sanctions that we proposed are likely to be very, very powerful for a very long time.”

Iran and Venezuela have largely been cut off from the world economy by U.S. economic sanctions.

The latest oil shipment was allegedly part of an oil-for-gold scheme that allows the two countries to trade without using U.S. dollars—making it nearly impossible for the United States to block the transaction through legal means.

The Trump administration has used Iran’s secretive oil trade to link together U.S. adversaries in a global alliance of authoritarians.

“China has been one of the countries that has continued to take oil from Iran, even in light of the terror campaign that they have engaged in,” Secretary of State Mike Pompeo told the Ben Shapiro Show in April. “Authoritarian regimes in times of crisis tend to work together.”

Iran’s oil deal with Venezuela is the latest example of this supposed budding axis of U.S. adversaries.

Pompeo has slammed both China and Venezuela for their dealings with Mahan Air, an airline accused of running smuggling flights for the Iranian military and participating in the oil-for-gold scheme.

“It is interesting how governments that isolate themselves from the rest of the world, they end up coming together,” Assistant Secretary of State Michael Kozak, in charge of Western hemisphere affairs, said at an April 24 press conference.

But some U.S. lawmakers see the looming U.S.-China conflict as a problem of a different order.

“We are entering an era of great power competition” involving “real adversaries, not little ones like Iran, but ones that can do serious damage,” Rep. Tom Malinowski (D–N.J.), former Assistant Secretary of State for Democracy, Human Rights, and Labor, said at an April event.

“The free nations again confront a common threat. The Chinese Communist Party is a menace to all free peoples,” he said. “During the past two decades, as we fought war after war in the Middle East, the Chinese government systematically built its military on the backs of our middle class.”