What U.S. Troops Are Really Doing In Syria 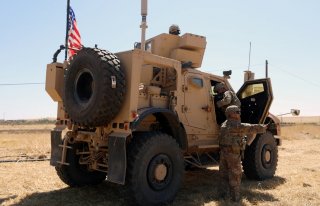 James Mattis famously resigned from his secretary of defense post citing opposition to President Donald Trump’s order to remove U.S. troops from Syria. So it came as a mild surprise when it was recently confirmed that Mattis opposed a plan to assassinate Bashar al-Assad, the president of Syria. This opposition was a prudent move as deposing Assad would not end Syria’s civil war but throw the country into deeper chaos. But this seeming incongruity of Mattis the hawk contra Mattis the dove is representative of the larger contradictions in Washington’s Syria policy.

These contradictions arise from the fact that U.S. policy in Syria has always been centered around opposition to Assad, rather than the defeat of ISIS, whose caliphate was destroyed long before Trump’s withdrawal order.

Perhaps this contradiction is most glaringly seen in the justifications Washington offers for the U.S. military presence in Syria. We are frequently told we’re there for one reason only to be given a new reason a few months later. It’s hard not to notice.

We were told the ISIS caliphate had to be defeated. But they lost their last scrap of territory in March 2019. Denied a physical base of operations, those going under the name of ISIS today are—as far as legitimate U.S. interests are concerned—indistinguishable from any other ragtag Sunni militias. But a defeated ISIS still wasn’t enough to convince Washington to withdraw.

ISIS’s caliphate was destroyed, completing the military mission that brought U.S. troops to the country. Why then are our soldiers still there? We’ve also been told they’re over there to counter Iran (which, by the way, had the same goal of destroying the ISIS caliphate).

Years ago, we were told that it’s important to be in Syria to counter Russia too. But today this mission—if it can be called that—amounts to the occasional road rage incident involving convoys representing the world’s only two nuclear superpowers pathetically struggling for space on a road or wheat field. It’s notable that this reason was recently revived to justify the decision to send more troops to Syria.

We’re also told that it’s important to support the Kurds and, though Washington has been quieter on this front lately, we were once told training and equipping anti-Assad militants was also vital. This latter notion resulted in an embarrassing situation where the CIA’s favored militants were fighting the Pentagon’s favored militants. These local groups have their own interests, but they shouldn’t be confused for America’s interests.

More recently, President Trump has touted a plan to “secure the oil” and his administration has paved the way for a U.S. company to manage some oil fields in the war-torn country. Trump has cited this as a reason for keeping the last few hundred U.S. troops in Syria. The thing is, ensuring American access to Syrian oil demands a certain level of security. More bluntly, it necessitates an endless occupation of Syria.

But, like any of the above reasons, it would be a mistake to accept that oil serves as the principal justification for the U.S. presence in Syria.

Trump has also defended the decision to keep a small contingent of troops in Syria by stating that Israel and Jordan asked him to keep our forces there. This justification was reaffirmed in a recent Trump rally where the president characteristically stated off-the-cuff, “The fact is, we don’t have to be in the Middle East, other than we want to protect Israel. We’ve been very good to Israel.”

What are we to make of this flurry of reasons for staying in Syria? It may be a little bit of each, but the overarching reason has always been to engage in a campaign of “regime change-lite,” tragically keeping Syria territorially divided in a simmering civil war and making Syrians bear the brunt of any—and there are many—negative consequences. This is why the United States originally armed anti-Assad rebels and why troops that were ostensibly sent to defeat ISIS have remained after the fall of the caliphate.

But viewing all these reasons together, it is dizzying to keep track of them. It is perhaps tempting to just take Trump at his word and assume that we’re actually there for the oil. While the amount of oil in Syria is a significant amount for Syrians, it’s nowhere near enough to be a vital concern for the United States. According to the U.S. Energy Information Association, the amount of oil in Syria is not even two percent of what Iran or Iraq boast, never mind America's own status as the number one oil producer in the world.

In fact, this is what’s striking about all of the above reasons in this list—not one of the justifications is about something vital to the security of the United States. Instead of carefully deconstructing each reason, this bird’s eye view is all we need to make sense of this confusing list of inconsistent and constantly evolving justifications for staying in Syria.

One of the greatest contradictions in Washington’s Syria policy is not the reason(s) that we’re there but the fact that we haven’t left. At least twice now, there has been an order to withdraw that has never been carried out.

U.S. policy toward Syria is defined by an absurdity that can’t be neatly untangled—a low-intensity regime change mission defined as anything other than its central mission. Every now and then, we’re offered a new explanation for why our troops are in Syria. At this point, the best response is to say, “enough is enough.”

We don’t need to keep playing this game of roulette where Washington spins the wheel and tells us why our troops are there—it’s a racket and should be recognized as such. Syria’s problems aren't our problems and the only sensible option that comports with U.S. interests is a full withdrawal of American forces.

Michael R. Hall is the communications manager of Defense Priorities and a geopolitical analyst. Follow him on Twitter: @michaelryhall.