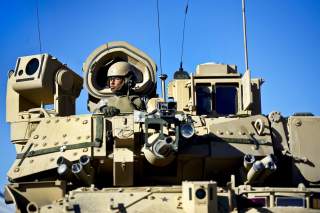 On October 6, around fifty U.S. commandos in northeastern Syria tasked with hunting down ISIS forces were withdrawn from territory near the Turkish border controlled by the Kurdish-Arab SDF faction.

The U.S. withdrawal was a prequisite for a Turkish attack against the Kurdish positions which subsequently took place in a matter of hours. The remaining hundreds of U.S. forces elsewhere in northeastern Syria were endangered in the crossfire and had to be withdrawn a few days later.

The withdrawal was post-hoc justified on the basis that they were no longer needed in the Middle East and it was time to “bring the troops home.”

But the weeks since, the United States has deployed over 3,500 more troops to the Middle East—including hundreds more troops in another region of Syria dispatched at the end of October.

This first of a two-part series will look at the recent deployment of hundreds of armored infantry to a notoriously blood-soaked battleground in northeastern Syria.

A companion article looks at the thousands of U.S. troops in air defense and Air Force units dispatched to support Saudi Arabia in its ongoing confrontation with Iran.

In reality, many of the operators withdrawn from northeastern Syria were redeployed to a remote U.S. base called al-Tanf in southern Syria, to the east of Damascus.

Then on October 25, the White House indicated it planned to send “tanks” to reinforce U.S. special operations forces stationed at Deir-es-Zor in southeastern Syria, on the eastern bank of the Euphrates River.

The exact composition of the attacking force, and whether it intentionally targeted U.S. troops remains disputed, though there’s strong they were aware of the American troop’s positions.

The likely reason Deir-es-Zor attracted such a large-scale attack lay in the nearby Conoco gas fields, also held by SDF forces. Reportedly, the attackers were promised a share of the profits if they seized the objective. While the oil field’s contribution to global production is small, they had been a major source of revenues to the Syrian government.

Therefore, while it would be disastrous if Deir-es-Zor were to fall back into the hands of ISIS, which is to be reconstituting itself as an insurgency, some reports suggest the Defense Department and White House are just as much motivated to deny access to the oil field to Iranian, Russian or Syrian government forces.

Following Trump’s announcements, columns of M-ATVs and trucks were spotted entering Deir-es-Zor. Then on October 31, media revealed the armored component would come in the form of 500 mechanized infantrymen of 4th Battalion/118th Regiment of the South Carolina Army National Guard, a unit currently attached to the ‘Old Hickory’ 30th Armored Brigade Combat Team.

The 30th had shipped its equipment into Shuaiba Port, Kuwait earlier in October with its Bradley fighting vehicles, Abrams tanks and Paladin self-propelled howitzers.

The “tanks” confirmed to have been dispatched are 33-ton M2A2 Bradley infantry fighting vehicles, transported using C-17 cargo jets. Though designed to carry troops into battle, Bradley’s also pack formidable firepower in the form of rapid-firing 25-millimeter Bushmaster automatic cannons and TOW anti-tank missile launchers. These are very deadly against infantry and lightly armored vehicles and the missile can engage tanks at long-range. However, the Bradley’s armor isn’t designed to withstand tank main guns and large anti-tank guided missiles.

There’s no confirmation if any of the unit’s M1A2 Abrams main battle tanks in Kuwait will be deployed to Syria as well. These would be more effective at destroying enemy tanks with their main guns, and would also simply be tougher to kill with frontal attacks. However, Abrams demand immense resources to transport, supply with fuel, and maintain and may not have been deemed suitable for the mission.

Either way, if the garrison at Deir-es-Zor comes under pressure, armored vehicle crews deployed to defensive positions may have to remain vigilant against ‘sniping’ attacks by man-portable anti-tank guided missiles fired from concealed positions miles away. These tactics inflicted heavy losses on Syrian and later Turkish tanks in Syria’s protracted civil war.

Overall, the exact purpose and duration of the Pentagon’s new Syria deployment remains murky and its prospects uncertain. If Assad and his supporting Iranian and Russian forces consolidate their positions in eastern Syria, then the U.S. garrison could become increasingly isolated and difficult to supply and defend. Furthermore, it’s unclear under what conditions the national guardsmen could be withdrawn, and their mission considered to have been accomplished.

For now, it seems the heavy armored infantry are deployed in Syria not so much to reap profits from oil fields as to prevent other actors in Syria’s multi-faceted conflict—ISIS, Iran, Russia and to Bashar al-Assad’s government, from profiting from their absence.