Why Donald Trump Must End the War in Afghanistan 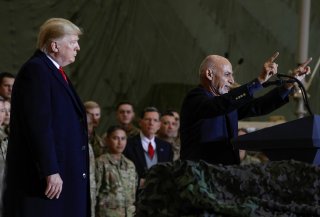 When Donald Trump was running for president in 2016, a key component of his platform was a mandate to bring America’s “endless wars” to a conclusion. Following multiple deployments to Iraq and Afghanistan as a Marine, the many experiences I endured during that time eventually left me with the definitive realization that America needs to end those wars. In fact, it should have brought our troops home many years ago. This desire to see my brothers and sisters in arms come home has only grown stronger by the day, which is why I believe that Trump should follow through on his promises of 2016 and bring them home immediately.

I deployed to Iraq and Afghanistan as an infantryman, as a scout/sniper, and finally as a reconnaissance team leader for the U.S. Marines. As simply as I can put it, my job was to hunt armed men. I felt that by hunting down the people who implanted IEDs and enemy shooters who targeted U.S. troops, I was saving American lives. But at some point, after taking human lives, one must ask, “Why did I do that?” To be clear, we were always in compliance with our rules of engagement and the laws of war and we only engaged threats confirmed to be acting with hostile intent. I’m not questioning the justification for each trigger pull; I’m questioning why we were there in the first place.

At the moment, it all seems very simple: They’re trying to kill us, so we have to kill them first. The internal conversation a veteran carries within his soul years after the uniform is boxed away and the beer gut shape swells a few inches, starts to become more complex. “Why exactly were we shooting those guys, politically? Why were we there? Why are we still doing this?” Our leaders owe troops who deploy into harm’s way a “why” long before they set foot on the ground overseas. To me, there hasn’t been a cogent explanation for some time. We continue to send our very best into Afghanistan, to kill and be killed—for what? The warfighter in the field to this day is simply trying to stay alive and is expertly executing his duty, even as Washington has allowed the “purpose” to be pulverized into the dust of cheap political rhetoric and talking points.

Was it that there was never a path to victory to be had in the first place? Or, has our political leadership failed our troops by not having the spine to demand clarity? Regardless, the situation in Afghanistan appears to be the same as it was years ago: we continue to be there simply for the sake of being there. As far as I’m concerned, this is not a valid justification and it is long past time to bring our troops home before any more die in vain.

On the surface, such a claim might resonate with the public as the weary, bitter ramblings of just another disgruntled veteran; furious with God and country for making a fool out of his beloved brothers and sisters in the face of such an archaic, irregular adversary. In reality, we spent nearly two decades occupying and patrolling a hostile tribal moonscape in the ludicrous belief that we might establish and defend a central democratic government in a land populated by cultures relatively unchanged since the Achaemenid Empire. We assumed that the peoples of Afghanistan were pliable but they weren’t. Whether they were Baloch, Pashtun, Turkmen, Hazara, or others, it made no difference. No American brigade or NATO task force was ever going to hold an iota of influence over the people of Afghanistan in the long run, they simply do not want to be governed by the outside. That historical fact is as old as Afghanistan itself. Shamefully, America’s political leaders and many of the top military brass continue to think otherwise, or worse, they know this to be true and continue to deploy us anyway.

Lamentably, I can now say without hyperbole that every single dusty spot of earth I fought the Taliban for is now back in Taliban hands. Normally this wouldn’t bother me, but when I think of the burned, maimed, and dead Americans who gave everything, I now worry about those one day being my own sons. It is imperative that America examine and accept the futility and endless waste that boots on the ground in Afghanistan will always perpetuate and finally end U.S. involvement.

To be clear, our troops are not to blame. Their tenacity and dedication is unparalleled.  However, it is hard to succeed when one has no strategic objective or end-state. The mission and mandates from 2001 have changed any number of times, completely blurring any “end state” for operations. As a result, we are reaping the inevitable political/strategic outcome which is a result of our twenty years of mission-creep and poorly defined objectives.

This is no surprise to those who have fought on the ground. Ultimately, there is no strategic goal or political end-state that a U.S. infantry soldier or U.S. Marine may accomplish. All we can do in a combat zone is patrol, shoot, and take casualties. U.S. ground combat doctrine does not, nor should it ever, teach U.S. forces to occupy, influence, coerce, and police. Sadly, this is exactly how we were employed though. Unsurprisingly, we made little political difference in Afghanistan in the end. Although the public may eventually forget our many failures there, too many shattered American families and gold star wives will forever live with their grief. I suppose that’s our real legacy. Few who have been in combat would disagree with this statement, but years afterward this becomes a legitimate question that demands a straight answer.

In the years since my combat service has ended, I have become a civilian and a father. As a father of two small children, I demand to know why I had to deploy and kill the fathers of other small children. Yes, they were shooting at us, and yes, they were burying IEDs in the ground, but why were we made to face each other in combat in the first place? To me, no casus belli exists at this point nor has it for some time. I continuously hear the same nonsensical talking points about the Taliban somehow helping with the 9/11 attacks, or perhaps that we’re “preventing terror from coming here.” While I strongly disagree with this tripe, such statements may have had some validity in 2001. It is now 2020 and this argument has long ceased to have any kind of validity but seems to be an adequate justification to the politicians who continue to deploy troops and the generals who employ troops. As a result, I truly hope that Trump ends the war in Afghanistan before he leaves office, as it is clear that the rest of those in Washington who wield power lack the character and honesty to make such an important decision.

Evan McAllister joined the Marine Corps in 2005 and deployed to Iraq and Afghanistan from 2006 to 2011 as a Scout/Sniper and Recon Marine. He left the military in 2016 and lives with his wife and children in Western Idaho.