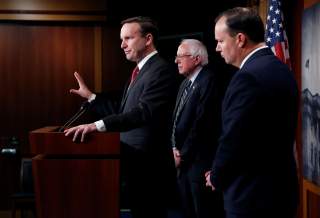 Earlier this year, James Mattis, secretary of defense, headed over to Capitol Hill to attend both Republican and Democratic Senate luncheons. His goal? Whip votes against a then-upcoming vote hostile to the American-backed, Saudi campaign in Yemen. Where Mattis and the administration prevailed in the spring, they failed Thursday in what is swiftly becoming a harrowing early winter for the White House.

“In a historic vote, the United States Senate reasserted Congress’s war-making authority by directing the president to withdraw U.S. support for the Saudi-UAE coalition’s war in Yemen. Enough is enough,” Stephen Miles, executive director of Win Without War, said after Thursday’s remarkable Senate vote—56-41 in favor of ending American sponsorship of the Saudi assault on Yemen.

Foreign-policy restrainers, such as Sen. Rand Paul, think fresh ground could have been broken; Paul told Breitbart News’ Matthew Boyle: “I think it is an extraordinary moment because for decades, maybe for 50 or 60 years, Congress has been relinquishing and abdicating [its] power to indicate whether the country is at war.”

Indeed the speed at which opinion in Washington shifted on the oft-ignored war in Yemen has caught allies of largely unconditional U.S. backing of the Kingdom of Saudi Arabia somewhat by surprise; they see a United States poised to forfeit vital national interests in region in a pique of piety.

“Yesterday’s vote was a bipartisan exercise in virtue signaling and abdication of strategic concern for American interests,” David Reaboi of the administration-friendly Security Studies Group told me Friday morning.

Not only the White House, but the Trump State Department, National Security Council and Pentagon are all now plainly on the defensive on Yemen. Prior to the assassination of journalist-activist Jamal Khashoggi, Thursday’s vote would have been unthinkable. It’s a testament to how swiftly a foreign-policy consensus, often thought unshakeable, can change in Washington—for good or ill.

Indeed, Mattis, who is strikingly in lockstep with the rest of the administration on the matter, has urged a decoupling of Yemen and the Khashoggi fallout. “The murder of Khashoggi . . . I would separate it out from the Yemen situation,” he said early this year.

But opponents of a tight-as-a-glove alliance with Riyadh have not let a good crisis go to waste.

“The bombing must end. The killing of civilians must end. The starvation must end. The misery must end,” Miles said. “We congratulate the legislation’s primary sponsors, Senators Bernie Sanders, Mike Lee, and Chris Murphy, for achieving this.”

“With this vote, Saudi Arabia just lost the support of Congress for their disastrous war in Yemen,” Murphy said Thursday. “A bipartisan majority spoke with one voice that the status quo is over and we will no longer accept the war crimes being committed in our name.”

Murphy, a possible presidential candidate, has toiled in obscurity on the issue for years; he’s plotted taking Donald Trump’s military powers from him, arguing that the occupant of the White House is unstable. If Sen. Murphy does run, he’s likely to tout the progress made on the issue as a major bona fide—that and his plan for a beefed up U.S. diplomatic corps, reviving a State Department he claims has been ignored by the administration, especially Mike Pompeo’s predecessor Rex Tillerson. Last year, Murphy told me “I think this administration is intent on neutering the State Department.” That’s changed somewhat with Pompeo, but in a direction likely to Murphy and restrainers’ disliking.

Personnel is policy, and though Washington may be on the verge of pulling back from Yemen, it’s seemingly lunging into other theaters, notably Iran and China. If Yemen is an example of a quick change in the policy posture in an ennobling direction, these two theaters could be different. This week, Pompeo signaled his displeasure with the regime in Tehran in a remarkable address to the United Nations. And National Security Advisor John Bolton warned of a Chinese economic annexation of Africa at the Heritage Foundation.