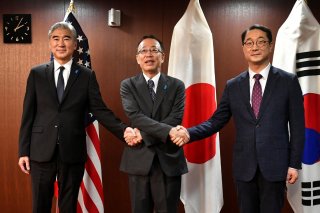 A pandemic-induced semiconductor supply chain snarl caused global production jams in a wide array of products used for consumer, industry, and military applications. Combined with the geopolitical risk created by the industry’s concentration in Northeast Asia, its reliance on China, and predatory Chinese industrial policies, this has caused America, its allies, and its partners to brace against future shocks. With the CHIPS and Science Act signed into law, Washington is now moving toward a semiconductor alliance with Tokyo, Taipei, and Seoul. A successful collaboration will address risks to key points of the semiconductor supply chain by adding rigor to the system, ensuring continued access to supply, and maintaining an environment of innovation.

It’s a step in the right direction, but much remains to be done. The effort will fall short if the alliance cannot address members’ concerns and respond to the risks posed by the People’s Republic of China (PRC) without tripping down the slippery slope of technological decoupling. Although the PRC poses a threat that warrants a response, the highly distributed nature of the global supply chain means that decoupling would be inordinately expensive, alienate America’s partners, and inhibit the innovative capacity of America’s firms. Furthermore, the fate of the industry will likely be determined by the innovation race, so the alliance should spend equal time cooperating on that front. The upcoming first meeting of the prospective chip alliance should address these concerns while formulating a framework for enduring cooperation and mutual gain.

The semiconductor industry is highly specialized and concentrated. There are over fifty points in the supply chain where a single country provides over 65 percent of supply. Last year, pandemic-induced disruptions caused a global supply problem, drawing attention to the world’s fourth-most traded product. The industry is heavily concentrated in Northeast Asia, where geopolitical risks are considerable. Since Taiwan makes over 90 percent of the world’s most advanced chips, a PRC takeover would cause a “deep and immediate recession” in the United States, according to Commerce Secretary Gina Raimondo. A contingency on the Korean Peninsula would have similar consequences.

The PRC could acquire a monopoly over a supply chain choke point and utilize this as leverage to extract concessions. The PRC already routinely weaponizes its economy with informal sanctions and engages in destabilizing industrial policies like irregular subsidies and forced technology transfers. Chinese firms collude with one another to weaken foreign takeover targets before buying them in a distressed state. Beijing engages in intellectual property theft against South Korean and Taiwanese firms. And the Chinese government’s sprawling chip investment vehicles also create the risk that a supply chain could “inadvertently support China’s military-civil fusion.”

The alliance should cooperate with the PRC wherever possible and confront it wherever necessary, mirroring U.S. secretary of state Antony Blinken’s statement that, in all matters related to China, America will “cooperate wherever we can … [and] contest where we must.” The United States should press Beijing to report irregular subsidies as required by World Trade Organization regulations and cease market-distorting practices and forced technology transfers. Subsidy ceilings should factor into the conversation, including with the PRC, to prevent a never-ending race to the bottom. Alliance cooperation on export controls with the European Union will be an important aspect of this approach. Multilateral export controls on semiconductor equipment are conducted through the Wassenaar Arrangement, a group of forty-two countries that collaborate on restricting dual-use technologies. But industry experts think the institution is inadequate, and have pushed for alternatives. However, while targeted restrictions are effective, “broad unilateral restrictions” could hurt U.S. firms, raise consumers’ costs, and cause pain to partner countries producing in China.

The best method to strengthen and secure the supply chain is a coordinated approach with allies and partners that avoids completely excluding the PRC, so long as it refrains from destabilizing behaviors such as invading Taiwan. Some have called for technological decoupling and total onshoring of chip production to cut dependency on the PRC. This is impractical. It would cost over $1 trillion to transition to a system wherein each country is self-sufficient, prompting a rise in costs of 35-65 percent. It would cost the United States $4 billion to build just one fab making the relatively low-tech chips needed for automobiles, which would only become profitable after five years. Furthermore, decoupling would alienate America’s allies (who count China as a top customer), decrease U.S. firms’ market share, and insulate U.S. firms from foreign innovation. Decoupling would lead to two separate ecosystems with different standards. Firms from countries like Taiwan and Korea would face a difficult choice: either get cut off from their manufacturing base or get cut off from the U.S. intellectual property that’s core to their products.

America has thus far attracted investments for fab plants from Samsung (a $17 billion fab in Texas) and Taiwan Semiconductor Manufacturing Company (a $12 billion facility in Arizona). The CHIPS Act will provide $52 billion in incentives to support chip manufacturing, research, and workforce development. Companies that receive this support are barred from building new advanced plants in China and from making certain advanced modifications to existing plants, leading some firms to “re-evaluate further Chinese investments.” These policies are just the beginning.

To coordinate on investments, supply chain resilience, and production plans, Washington proposed Chip 4, a group involving the United States, Japan, Taiwan, and South Korea. Taiwan and Japan have committed to joining, with Taiwan calling for greater semiconductor cooperation among democracies. South Korea has taken a more cautious approach, agreeing to attend the first meeting. Korea’s memory chip producers rely on materials from China and chips account for nearly 40 percent of Korea’s exports to China. A news report claimed that the U.S. Commerce Department has exempted some Korean fabs in China from restrictions banning equipment capable at producing chips below 14 nanometers. The alliance will be more durable if it demonstrates flexibility. Forums of cooperation should not simply be based on a contest of leverage against the PRC.

How has Korea found itself at the center of the dynamic? The PRC interprets the other Chip 4 members as outside its sphere of influence, but losing traction with Korea would signal that the PRC’s regional influence is waning. The Yoon administration and Beijing are off to a rocky start, with tensions simmering over Beijing’s assertion that Seoul is beholden to a supposed agreement by the former administration not to install more U.S. missile defense systems. Beijing’s 2017 economic retaliation cost Korea over $7 billion and pushed the Korean public to turn sharply against the PRC: 80 percent currently view the PRC negatively, a record high, according to Pew. And three-quarters of the public want the government to “actively respond to China’s economic retaliation,” according to a 2021 survey by the Korea Institute for National Unification.

Following a recent meeting between South Korean foreign minister Park Jin and Chinese foreign minister Wang Yi, the PRC’s foreign ministry asserted that “the two sides need to stay committed to openness … and keep the industrial supply chain stable and unfettered.” In the meeting, Park explained that Korea’s attendance at the Chip 4 meeting is meant to safeguard “national interests,” not to exclude “any specific country.” Korea will make a decision about joining after the meeting, and has taken to referring to Chips 4 as a “consultative body,” rather than an alliance. While certain export restrictions are needed on national security grounds, it will be important to refrain from over-punishment of partners that deviate from export controls. The success of cooperation hinges not on the comprehensiveness of export restrictions but on the ability of the partners to shore up the supply chain while sustaining a high-tempo pace of innovation.

The United States should collaborate with Korea, Taiwan, and Japan on a mutually beneficial, values-based vision for semiconductor collaboration that protects national security interests without spoiling supply chain efficiencies. The alliance should create a compensation mechanism to address retaliatory measures its members experience for participating in the alliance, such as assisting affected industries or reciprocal sanctions. To balance resilience and innovation, the alliance should engage with industry stakeholders, including (but not limited to): private sector firms, academia, and industry associations. Joint ventures, joint investments, and joint workforce development programs would benefit all, as would contingency planning and supplier diversification. A priority should be the resolution of a dispute between Japan and South Korea that has impacted the trade of semiconductor-related materials between the two countries. Amid growing tensions, Japan restricted exports of semiconductor materials to South Korea. The move disrupted supply chains between both countries.

The pandemic-induced chip supply chain snarls are not the industry’s last supply chain challenge. Geopolitical risk and Chinese industrial policy pose considerable risks and warrant coordination. But alliance partners’ concerns should be considered and decoupling is not viable. The better option is a partnership that addresses security threats without impairing the global supply chain.

Major Jessica Taylor ([email protected]) is a logistics readiness officer in the United States Air Force Reserve (USAFR) and a Ph.D. student in Security Studies at Princeton University’s School of Public and International Affairs, where she focuses on alliance cooperation on systemic geopolitical risk to supply chains.