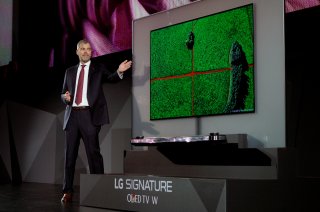 LG Display, according to reports last week, unveiled a ninety-seven-inch OLED panel, its largest ever, at an event in South Korea.

“The newly-unveiled 97-inch OLED.EX display boasts the company’s special ‘Film CSO (Cinematic Sound OLED)’ technology, which allows the display to vibrate and generate the sound directly from the display without separate speakers. A 5.1 channel sound system is embedded into the widescreen, creating a performance that offers a cinematic level of immersion,” LG said. That TV, reports said, even vibrates to create sound, rather than utilizing traditional speakers.

That panel will be used in an OLED TV set for launch later this year.

Now, there's a report that LG Display is working on its smallest OLED panel ever.

According to The Elec, LG Display “is planning to unveil a 20-inch OLED panel by the end of the year for application in personal devices.” That appears to be a reference to gaming devices.

LG Display vice president Kang Won-seok revealed the plans in a speech this week to the Korea Display Industry Association.

Kang also said, per The Elec, that LG Display will unveil a seventy-seven-inch transparent OLED screen, sometime in 2023. That would be its largest screen of that kind.

Per Ars Technica, the smallest OLED TV made by LG Electronics is currently forty-eight inches.

“LG is the leading manufacturer of OLED panels for several other device categories, and the company has been making panels for watches, TVs, and smartphones—but this will be the first time the company will make OLEDs suitable for computer monitors or smaller televisions,” Ars said.

LG Electronics’ OLED lineup is well-represented in RTINGS’ current rankings of the best TVs available on the market. The B2, C2, and G2 models are ranked second, third and fourth in the top ten, behind only Samsung’s S95 QD-OLED model. All three of the ranked LG models have a mixed-usage score of 9.0, compared to 9.1 for the Samsung TV.

“The LG B2 is a fantastic overall TV. It’s remarkable for watching movies in dark rooms thanks to its near-infinite contrast ratio with perfect blacks, and it’s also excellent for watching HDR movies, but some colors don’t look vivid. If you watch shows or sports in bright rooms, it’s impressive as it has incredible reflection handling to fight glare from a few light sources, but it doesn’t get bright enough to fight a ton of glare,” RTINGS said of the B2.

“It's incredible for gaming as it has features to take full advantage of the PS5 and Xbox Series X, supports variable refresh rate (VRR) support to reduce screen tearing, and has low input lag and a near-instantaneous response time for smooth motion. It's fantastic to use as a PC monitor, but OLEDs risk permanent burn-in when exposed to the same static elements over time.”