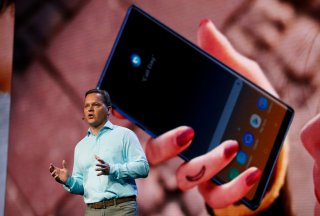 Going to get your phone repaired, but worried about the technician stealing your data? Samsung is working on a solution.

According to a report from SamMobile, which cited an announcement by the company in South Korea.

“When activated, it ensures that the personal data on your Galaxy smartphone remains secure even when the repair technician is working on it. The Samsung Repair Mode allows users to selectively choose which data they wish to disclose when their phone is in for repair,” Sam Mobile said about the new feature.

It's not clear yet when the feature might be rolling out on Samsung devices in the United States.

“When the user executes ‘Repair Mode’ in the ‘Battery and Device Care’ menu in the ‘Settings’ of the smartphone, the smartphone is rebooted. After that, you won't be able to access your personal data, such as photos, messages, and accounts, and only use the default installed apps,” Samsung’s Newsroom said, per an English translation of the Korean site.

“After repairing the smartphone, the user can access personal data again after exiting the 'repair mode' and rebooting through pattern/fingerprint recognition.”

It will first be available in the Galaxy S21, in South Korea, with other models to come later.

The Galaxy S21, according to a Counterpoint Research survey this summer, is the most popular smartphone in South Korea.

In a review of the S21 published this summer, Tom’s Guide called it “a more refined, smarter and crucially cheaper new flagship phone.”

"Samsung's Galaxy S series have been do-everything, have-everything flagship phones. But with the Galaxy S21, Samsung has decided to take away almost as much as it’s upgraded. What could be a recipe for failure has actually yielded an excellent Android smartphone that came in $200 cheaper than the Galaxy S20 at launch.”

In the past, many smartphone consumers have worried about technicians looking at their data or photos during repairs. Consumer concern even preceded the case in which a woman sued Apple after employees of an authorized repair shop took and uploaded “extremely personal and private material” from her phone. She went on to sue Apple and settle for millions of dollars. There have also been multiple cases involving Best Buy and similar companies, in which photos have been stolen from the computers of customers who brought them in for repair.