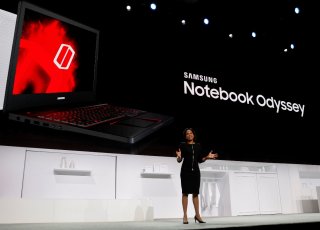 The Odyssey Ark—Samsung’s fifty-five-inch curved 4K gaming display—is available for pre-order, the company announced this week. According to The Verge, the product will cost $3,499.99, and it will begin shipping from Best Buy and Newegg on September 12.

“The large 1000R curved display wraps around a gamer’s field of view, filling their peripheral vision for next-level immersion. This is further emphasized by Odyssey Ark’s Cockpit Mode, which enables the screen to rotate vertically for an entirely new gaming and multi-tasking experience,” Samsung said in its description of the product.

Some hands-on reviews of the Odyssey Ark product arrived last week. “The Samsung Odyssey Ark is a total spectacle. From its 55-inch, 1000R curved screen, and multitasking menus, to its integrated lighting and dedicated control pad, it’s the most maxed-out gaming monitor we’ve ever seen. Did we mention that it rotates?” Tom’s Guide said of the product.

“Pitched as a ‘personal gaming theater,’ the Samsung Odyssey Ark ($3,499) recreates an entire desk setup with all its bells and whistles. While the device is perhaps a bit flashy for a work monitor, you can certainly use it to manage projects. It’s also essentially a smart TV, so you can stream your favorite shows. Or, you can game, work and watch simultaneously, thanks to the Odyssey Ark's flexible multitasking interface.”

The Verge also weighed in on the Odyssey Ark. “Surprise: gaming with my face three feet away from a 55-inch 4K display with 165Hz refresh rate is awesome. But I was equally impressed with the bounty of features that the Ark can deliver,” the site’s own early review said.

“The Ark, like Samsung’s other high-end gaming monitors, is a melding of its best TV panel technology with features that gamers with deep pockets will likely enjoy, like HDR, VRR, and four HDMI 2.1 ports (though, curiously, no DisplayPort). It has Samsung’s quantum Mini LED backlighting that it claims is capable of up to 1,500 nits at peak brightness, and the company claims that it’s the first 55-inch 4K panel that supports 165Hz refresh rate,” the review continued. “The Ark seems like a known quantity on its face, but there’s something about it that feels unique. It packs impressive gaming monitor specs into a design that is, by all accounts aside from the stand, an old-school curved TV.”