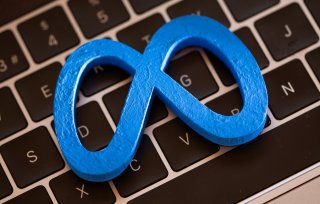 Meta, the company formerly known as Facebook, has bet its future on the metaverse, even changing its name. Based on the technology it obtained when it acquired Oculus in 2014, the company has amassed a massive lead in the virtual reality (VR) headset market. But a new report says that Meta will soon be facing big competition.

According to a report released Thursday by IDC, the Worldwide Quarterly Augmented and Virtual Reality Headset Tracker, global shipments of VR headsets jumped 241.6 percent in the first quarter of 2022, with Meta grabbing 90 percent of that market. TikTok parent company ByteDance's Pico, a product sold almost entirely in China, is in second place, with 4.5 percent of the market.

But as the category continues to grow, and as Meta eyes a new generation headset, competition is about to get much stiffer, with Sony and Apple eying the category too.

“All eyes will be on Apple as it launches its first headset next year, and while it is tempting to imagine the company shipping high volumes, keep in mind that this is its first headset that will appeal primarily to a small audience of early adopters and Apple fans,” Ramon Llamas, research director with IDC's Augmented and Virtual Reality team, said in the release. “Further iterations will likely show evolution that will grow by leaps and bounds. In the meantime, companies like Meta and Sony already have a strong installed base and pent-up demand that they can tap into. Altogether, this is a strong driver to push the market forward.”

Meta still has hope of staying on top, IDC said.

“The good news is that the upcoming productivity-oriented headset from Meta will serve as the starting point for the company's pivot towards higher revenue generating hardware and will also help provide an uplift in end-user pricing for the entire industry as average selling prices creep up and the tech substantially improves,” Jitesh Ubrani, research manager for IDC Mobility and Consumer Device Trackers, said in the release.

Speaking at South by Southwest back in April, former Nintendo of America CEO Reggie Fils-Aime had harsh words for Meta’s place in the Metaverse.

“You have to admit that Facebook itself is not an innovative company,” he said. “They have either acquired really interesting things, like Oculus, or Instagram, or they’ve been a fast follower of other people’s ideas. That’s Facebook.”

“I think metaverse is just like the cloud of five years ago, and even the Internet of 20 years ago. It’s a label that every business is trying to grab onto, to say that their business is part of the metaverse,” Fils-Aime said in the South by Southwest keynote. “For me, the metaverse is a digital space where you interact with your friends in a social and, I believe, gaming type of environment. So it’s social, it’s digital, and there’s an ability to interact with friends and people who have potential to be your friends.”