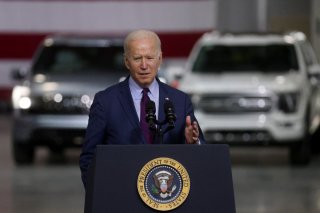 The push for electric cars will result in more than half of passenger cars sold in the U.S. being electric by 2030, according to a report released this week by BloombergNEF.

The Inflation Reduction Act (IRA), which funds $374 billion in investments in electric vehicle (EV) infrastructure and credits—including the creation of hundreds of thousands of charging stations around the country—is seen as a big reason for the expected rise in adoption, as previous forecasts from before the new law’s enactment placed the expected adoption of EVs in 2030 at just 43 percent.

“In the next year or so, there shouldn't be too much of a difference [in sales],” BloombergNEF electric car analyst Corey Cantor said in the report. “Later in the decade, we expect not only the EV tax credit but the battery production tax credit to drive a steeper decline in EV costs.”

The report also said that three particular car manufacturers, Tesla, GM, and Ford, stand to benefit most from the new law, as they have “the most domestic battery production coming online in the near term.” But most of the major players in the automotive business are at some stage of making a move into the design and production of electric vehicles.

Last month, the Detroit Auto Show showed a glimpse of what one local media outlet called “the electric future,” with President Biden even visiting the show. But MLive noted that there weren’t many charging stations available in the immediate vicinity of the venue where the event was held.

The president has set a “target” for electric vehicle sales to cross the 50 percent mark by the end of the decade, although that isn’t a mandate. California and Washington have announced they are phasing out sales of gas-powered cars, with New York’s governor announcing a similar rule earlier this week.

"New York is a national climate leader and an economic powerhouse, and we're using our strength to help spur innovation and implementation of zero-emission vehicles on a grand scale," New York Gov. Hochul said in a statement this week. “With sustained state and federal investments, our actions are incentivizing New Yorkers, local governments, and businesses to make the transition to electric vehicles. We're driving New York's transition to clean transportation forward, and today's announcement will benefit our climate and the health of our communities for generations to come.”

The New York rule, once enacted, will require all new “passenger cars, pickup trucks, and SUVs sold in New York State to be zero emissions by 2035.”